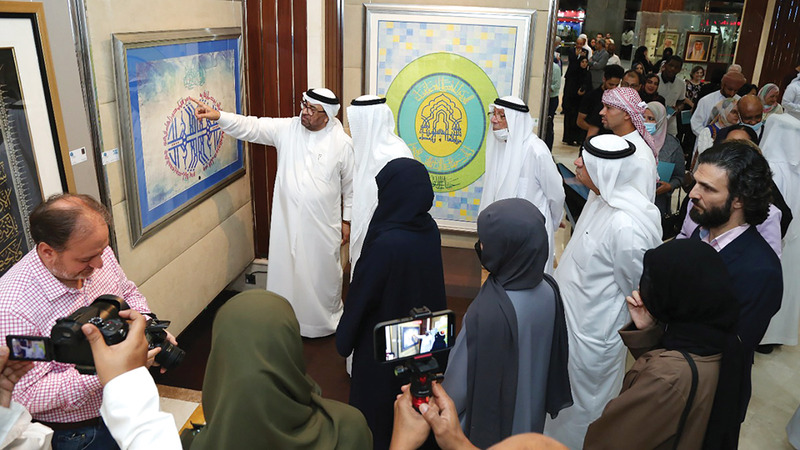 With the participation of 63 pioneering and young calligraphers from various schools, the activities of the Al Owais Forum for Arabic Calligraphy were launched yesterday at the Sultan Bin Ali Al Owais Cultural Foundation in Dubai.

The forum was inaugurated by the Chairman of the Board of Directors of the Mohammed bin Rashid Al Maktoum Library, Mohammed Ahmed Al Murr, accompanied by the writer Abdul Ghaffar Hussein and the Secretary General of the Sultan Bin Ali Al Owais Cultural Foundation Abdul Hamid Ahmed.

There were numerous participations between the types of Arabic calligraphy and its vocabulary from gilding, embellishment and rotation to become paintings that speak life and melodies, a journey between the types of Arabic calligraphy and their manifestations, the connection and separation of letters in graceful or geometric artistic formations, and between the ancient, developed and modern scripts, Kufic, Diwani, Naskh, Raq’a and Nasta’liq, What is it derived from and inspired by?

Muhammad Al-Murr was briefed on the works of all the participants, which were close to 110 pieces, written and drawn to perfection, and praised their creativity and wished them more success, especially as they maintain a great civilizational identity by continuing to learn and teach in this craft that stirs emotions and elevates it to a sublime level.

Al-Jallaf said: “Arabic calligraphy has gone through many stages during its course from pre-Islamic times to the present day, and scholars of the history of writing believe that the script went through several stages until it reached us in the form it is now. .”

On his part, Taj Al-Sir Hassan said that “Arabic calligraphy has in the last four decades witnessed a revival and renaissance in Arab and Islamic countries, and the UAE had a central and important role in this renaissance.”

Celebrate New Goals with Hyundai Back to School Offers