30 participants in the Arab Poetry Forum in Chad 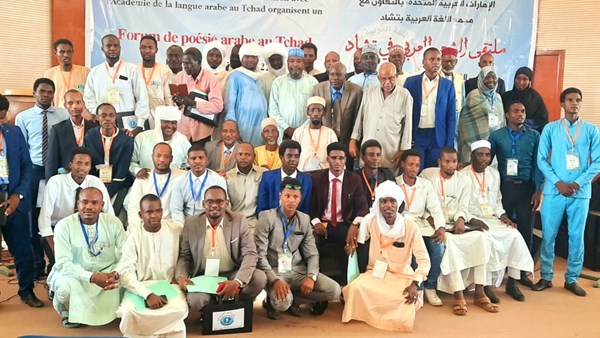 Under the patronage of His Highness Sheikh Dr. Sultan bin Muhammad Al Qasimi, Supreme Councilor and ruler of Sharjah, continues Sharjah’s Ministry of Culture to organize poetry collections in Africa. In this context, the activities of the first edition of the Arab Poetry Forum in Chad were launched yesterday, which will be held over two days in collaboration with the Academy of the Arabic Language in Chad with the participation of 30 poets. The opening ceremony of the forum was attended by Rashid Saeed Al Shamsi, the country’s Ambassador to the Republic of Chad, Bailacim Embayo Fensa, Secretary General of the Ministry of Culture and Representative of the Ministry of Higher Education, Research and Innovation in the Republic. of Chad, Professor Othman Mohamed Adam, President of the Arabic Language Academy, and a number of officials, diplomats, university and department professors, students and lovers of Arabic poetry.

Dr. Ahmed Aboul Fotouh Othman, Chadian cultural coordinator, said: “His Highness Sharjah’s ruler, having made the emirate a destination for science and a destination for understanding, is today expanding the horizon for the Arabic language to rise in the spaces of Africa, so that this constellation is gathered in one forum, the first of its kind in Chad. ” That the forum will be a real revelation of poetic talents in his country.

Rashid Saeed Al Shamsi, for his part, said: “The United Arab Emirates is a pioneer in organizing major poetry festivals, and here we are witnessing this collaboration between the Academy of the Arabic Language in the Republic of Chad and the Institute of Culture in the Emirate of Sharjah to establish this cultural event that helps to deepen the bonds of brotherhood between the two peoples. ” He pointed out that “the forum brings together a group of intellectuals and those interested in Arabic poetry in Chad, and it will represent a fundamental pillar of Arab and Islamic culture.”

For his part, Baylacim praised Embailo Sharjah’s role in supporting the culture and initiative represented in poetry in Africa by His Highness Sharjah’s ruler, wishing that the forum would be held at regular intervals so that the Chadian literary cultural scene would revive and raise the level of intellectual and competence in the field of poetry.

In return, Professor Othman Mohamed Adam shed light on the emergence of the Arabic Language Academy in Chad, where it was entrusted to serve this universal language, and pointed out that the Arabic Poetry Forum in Chad will be a significant support for the registration and expansion of this language , as well as activating the cultural inventory, highlights the status of literature and discovers talents.The new noodles. The poetic readings varied in the forum between nostalgia and hope regarding its singularity and the symbolism of its artistic images on the one hand and from the pain of the self and reality on the other, so that a poetic language bearing meaning and remarkable details was revealed .

EU and Egypt step up cooperation on climate, energy and the green transition