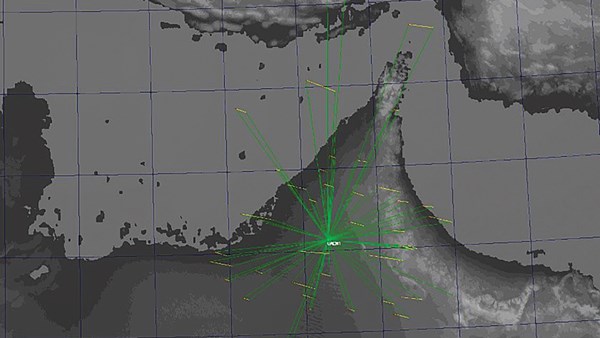 The Emirates Agency is working in collaboration with partners on the implementation of 5 research and development projects from the “Emirates Network for Meteor and Meteor Observation” project, a joint project between the Emirates Space Agency and the Sharjah Center for Space and Astronomy. The network consists of three different stations spread across the UAE to record astronomical phenomena in the country’s skies. Each station includes astronomical cameras aimed at the sky, and they automatically record as soon as a meteor appears, which may be part of a meteor shower. or a piece of space debris. When this meteor is captured from more than one location, its trajectory is calculated so that its source can be determined.
This comes within the framework of strengthening scientific research efforts, innovations and projects in the field of space, while the UAE Space Agency seeks to provide all support for space scientific research and discoveries through direct investment and through funds for research and space studies provided by local and international institutions.
The Meteor Observation Network project is a system dedicated to detecting, monitoring and tracking space objects entering the Earth’s atmosphere, which may be of natural origin, meteorites or man-made space debris such as remnants of satellites. This system can be used to try to predict where any objects that may escape combustion will fall to the ground.
The aim is to study the nature, speed and distribution of these accidents and to try to predict their source, how they will behave during their descent through the Earth’s atmosphere and where the impact point may be on Earth.

Satellite data processing
In addition, a satellite command and data processing software development project that will run on the satellites, following a multi-layered development approach resulting in flexible software modules that can be ported to different hardware architectures, is developing a mission design concept. and system specifications as well as development of command equipment and data processing for satellites to handle all kinds of data coming from the vehicle.
There is also a project to map the country’s land areas using satellite images, developing a taxonomic map for the Emirates, which is in the process of analyzing satellite images using artificial intelligence techniques in collaboration with the United Arab Emirates University, in addition to a project for the development of low energy devices to detect radiation for use in space applications in collaboration with Khalifa University.

radiation detection
This project aims to develop extremely low energy and light weight radiation detection and dosimetry for the space environment. The technology will significantly contribute to extending the life of the satellite and thus reduce the costs of launching. An integrated system of electronic components compatible with the space environment is currently being designed and built.
The project is also implementing a project to develop a catalog of materials used with the help of multispectral and hyperspectral students from Zayed University. The project deals with applications of remote sensing and hyperspectral spectroscopy. The team developed mathematical modeling of the spectral response of mixed soil materials, developed a special local interactive spectral library and built Emirati national skills in sensing. After, the project also studies the impact of invasive species on the environment in the United Arab Emirates, and perform optical reflection measurements for mineral exploration and the surface study of Mars.

Issa Al Mazrouei: “The Missing Piece of My Heart” is my first step towards the world of the novel