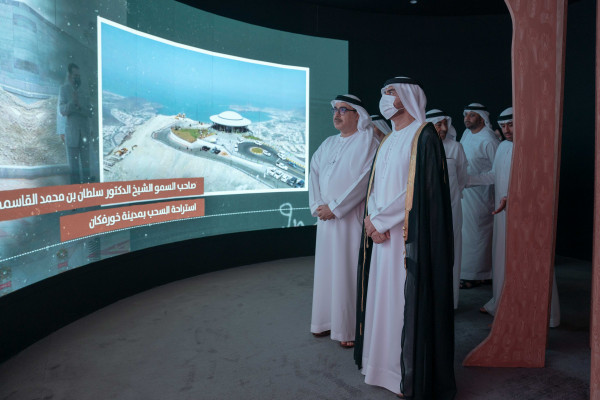 Taking place in the Heart of Sharjah, the event will run until 28th March.

Upon his arrival, Sheikh Abdullah was received by Emirati folklore performances and folkloric performances by the Republic of Armenia, the guest of honor for the current edition of the SHD, in addition to performances by Arab and foreign teams.

Sheikh Abdullah toured the festival where he was briefed on the scheduled events and activities.

The Republic of Armenia, the guest of honour of this edition, participating in a distinctive pavilion, where artistic performances will be presented, in addition to the sections of the pavilion that reflect Armenia’s rich and diverse cultural and heritage reserves.

He also visited the Romanian pavilion and was briefed by the pavilion’s official on what they are showcasing this year, which strengthens and consolidates the bridges of cultural communication between Romania and the UAE.

Moreover, Sheikh Abdullah visited the Emirati Handcrafts Centre, including 14 traditional professions, and 15 craft workshops, where a group of craftswomen presents UAE’s traditional crafts, which contributes to preserving the country’s folklore.

During his tour, Sheikh Abdullah visited several exhibitions which include four main exhibitions and 21 cultural programmes, starting with the exhibition “50 Years of Sultan’s Reign”.

33 countries are participating in this year’s Sharjah Heritage Days.

In addition to the main events held in the Heart of Sharjah, the cities of the central and eastern regions of Sharjah will host some events, as Sharjah Heritage Days are held in Khorfakkan, Kalba, Dibba Al Hisn, Al Dhaid, and Al Hamriyah.

UAE reaffirms right to protect itself from terror threats