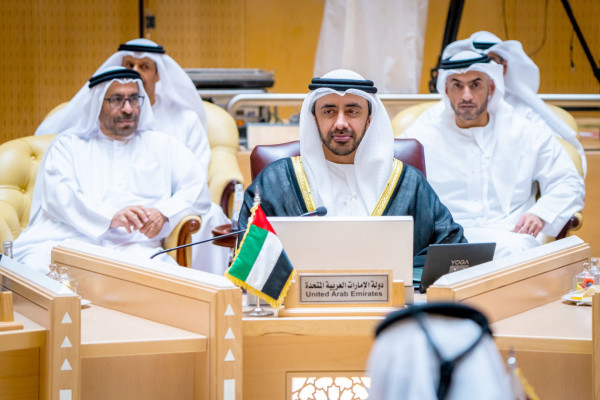 RIYADH, 1st June, 2022 (WAM) — H.H. Sheikh Abdullah bin Zayed Al Nahyan, Minister of Foreign Affairs and International Cooperation, participated in the 152nd Ministerial Council meeting for the 42nd session of the Supreme Council of the Cooperation Council for the Arab States of the Gulf (GCC), held at the GCC’s General Secretariat headquarters in Riyadh, Saudi Arabia, in the presence of Their Highnesses, Excellencies, and Ministers of Foreign Affairs of the GCC.

The meeting was chaired by Prince Faisal bin Farhan bin Abdullah, Minister of Foreign Affairs of Saudi Arabia, Chairman of the current session of the Ministerial Council, with the participation of Dr. Nayef Falah Mubarak Al Hajraf, Secretary-General of the GCC.

The Council reviewed joint Gulf action and developments at the regional and international levels, as well as the efforts made by the working committees.

In a statement, the Council offered sincere condolonces to the UAE leadership, government and people on the passing of Sheikh Khalifa bin Zayed, and praised his role in strengthening the march of the GCC, as well as his efforts in serving Arab and Islamic causes to achieve regional and global peace.

The Council also congratulated His Highness Sheikh Mohamed bin Zayed Al Nahyan on his election as UAE President, expressing confidence in his abilities to enhance the UAE’s commitment to support the GCC’s march to achieve its goals and maintain its security, in order to preserve the stability and prosperity of the GCC countries and their peoples.