Copyright 2021 - All Right Reserved
Home News Abdullah bin Zayed: Our relationship is characterized by Saint Vincent and the Grenadines
News

Abdullah bin Zayed: Our relationship is characterized by Saint Vincent and the Grenadines 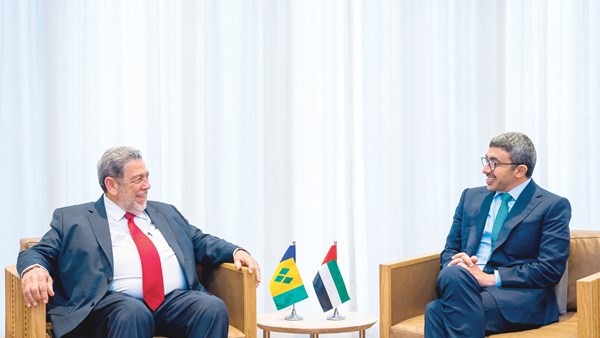 His Highness Sheikh Abdullah bin Zayed Al Nahyan, Minister of Foreign Affairs and International Cooperation, met with His Excellency Ralph Gonsalves, Prime Minister of Saint Vincent and the Grenadines.
During the meeting, which was held on the sidelines of the United Nations General Assembly, the two sides discussed avenues for joint cooperation between the UAE and Saint Vincent and the Grenadines, and ways to improve them in various areas.
They also reviewed the topics on the agenda for the 77th session of the General Assembly, including climate change and global efforts to combat it and the importance of deploying renewable energy solutions.
The meeting discussed developments in the regional and international arenas, and views were exchanged on this.
His Highness Sheikh Abdullah bin Zayed Al Nahyan emphasized the distinguished relations between the United Arab Emirates and Saint Vincent and the Grenadines and the willingness to strengthen them at various levels to achieve the common interests of the two friendly countries and peoples.
His Excellency Ralph Gonsalves, for his part, emphasized the depth of the ties in the joint cooperation between the two countries and praised the leading position that the UAE occupies at the regional and international level.
The meeting was attended by Reem bint Ibrahim Al Hashimi, Minister of State for International Cooperation, and Omar Ghobash, Assistant Minister of Foreign Affairs and International Cooperation for Cultural and Public Diplomacy.