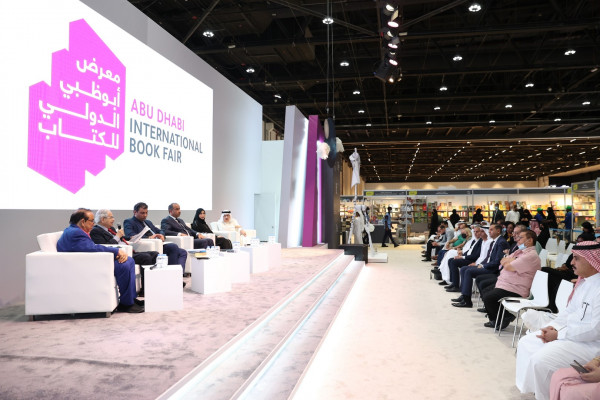 ABU DHABI, 28th May, 2022 (WAM) — A panel discussion at the 31st Abu Dhabi International Book Fair this week has seen experts and academics discuss Egyptian writer and intellectual Taha Hussein, considered one of the most influential cultural figures of the 20th century.

During the session, entitled ‘Taha Hussein: Critic and Thinker’, Arab academics agreed that Hussein deserved the title of ‘Dean of Arabic Literature’ for his immense contributions to modernising Arabic literature. His critical approaches were even compared to the great Arab classical poet, philosopher and writer Abu Alaa Al Ma’aari.

Dr. Hassan Nazim, Iraq’s Minister of Culture, Tourism and Antiquities, described Hussein’s literary status and genius in creating a modern shift in the Arabic language paradigm that led to its modernisation, noting his keenness to rethink Arabic language heritage and adapted it to the needs of a new generation”.

Dr. Mohsen Al Musawi, Professor of Arabic Studies and Comparative Literature at Columbia University, New York, said that Hussein continually worked to defend intellectuals who immersed themselves in honing their craft. “At the height of his career, during the cholera epidemic in Egypt, he adhered to his critical and intellectual vision and philosophy. He was keen that societies and countries should be led by educated leaders,” he added.

Dr. Hassan Madan, Bahraini author and academic, commented, “Dr. Taha Hussein drew the features of the intellectual and literary road map needed by us as Arabs. It is an Arab project that concerns Arab culture, and we here in Abu Dhabi, as Arabs, are discussing his importance as a great literary figure. We need to engage more with his writings to understand his experience and legacy.”

Dr. Diaa Al Kaabi, Associate Professor of Modern Literary Criticism at the College of Arts, University of Bahrain, said that Dr. Hussein is a man of great depth and foresight, with a deep connection between him and Abu Alaa Al-Ma’aari, the classical poet, and noted that Hussein’s blindness lent him a unique insight, which reflected in his critical speeches.

Dr. Ahmed Al Saeed, Founder and Executive Director of Beit Al Hikma, Cultural Industries Group, said, “Dr. Hussein’s literature resonated in China and with Chinese intellectuals and writers. I have reviewed many doctoral and Masters’ theses that dealt with his work as he is regarded as a great figure, not only a regional figure but a global one whose work is respected all over the world.”

The session was attended by Saqr Ghobash, Speaker of the Federal National Council (FNC); Ambassador Dr. Muzaffar Mustafa Al Jubouri, Iraq’s Ambassador to the UAE; Dr. Ali Bin Tamim, Chairman of the Abu Dhabi Arabic Language Centre; and a number of other officials and cultural figures, as well as journalists and media professionals.

7,434 doses of COVID-19 vaccine administered during past 24 hours: MoHAP