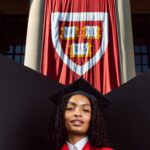 Shahidi took to the social media platform to mark the occasion, sharing two photos of herself wearing a black graduation gown and a custom Dior skirt suit in the prestigious Ivy League school’s signature red hue.

Additionally, Shahidi’s father, Afshin, also took to the social media platform to post a selfie photo of himself and his daughter on her graduation day.

A number of celebrities also took to the “Grown-ish” star’s comment section to celebrate the fresh graduate.

“Congratulations, Yara! This is such a special accomplishment. I am so proud of you and the strong example you’ve set for others to follow,” she wrote.

The 22-year-old was accepted into the school in 2017, but took a gap year before beginning her studies.

According to a piece published by Vogue US, Shahidi studied in the school’s social studies and African American departments. Her focus was on “Black political thought under a neocolonial landscape,” and prior to graduating she completed a 136-page thesis titled “I Am a Man: The Emancipation of Humanness from Western Hegemony Through the Lens of Sylvia Wynter.”

Working on her thesis, Shahidi said she felt “pushed” as an academic.

“It was important for me, as a young adult, to prove to myself — during these times of transition — that I am capable, and perhaps more capable than I give myself credit,” she told the magazine.

During her four-year undergraduate program at Harvard, Shahidi maintained her busy schedule as an actor — starring in hit shows “Black-ish” and “Grown-ish” ­— producer, and Dior brand ambassador.

Shahidi’s impending post-grad plans including wrapping up the filming of the fifth season of “Grown-ish,” which is slated to kick off in July.
Main category: LifestyleEntertainmentTags: Yara Shahidi