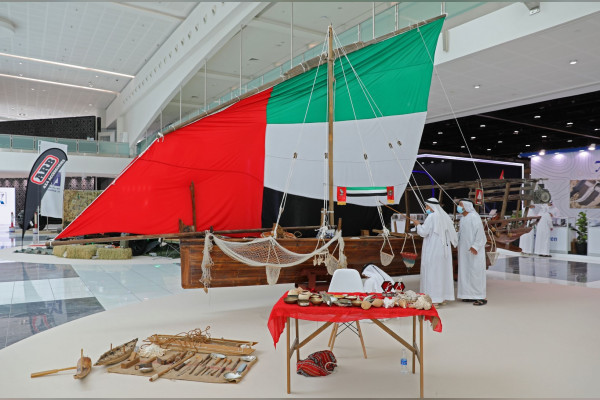 ABU DHABI, 27th April, 2022 (WAM) — The Arts and Crafts exhibits on display at the Abu Dhabi International Hunting and Equestrian Exhibition (ADIHEX) highlights the aesthetics of the UAE cultural heritage, where efforts are exerted to raise awareness about the importance of preserving traditional crafts and professions, and the sustainability of traditional industries.

ADIHEX, held under the theme “Sustainability and Heritage… A Reborn Aspiration” has sought to strongly depict the masterpieces of handicrafts that personalise the UAE’s history, authentic heritage and ancient environment in the events celebrating the cultural heritage and human civilisation from different continents.

The 19th edition of ADIHEX 2022 will be organised by the Emirates Falconers’ Club from September 26th to October 2nd, and sponsored by the Environment Agency – Abu Dhabi, International Fund for Houbara Conservation and Abu Dhabi National Exhibition Centre, where the event is being held.

The Arts and Crafts sector presents a major artistic platform to display the products of an elite group of Emirati creators, individuals and organisations, which is a real opportunity for communication between them and enthusiasts of the UAE’s artistic cultural heritage.

Majid Ali Al Mansouri, Chairman of the Higher Organising Committee of ADIHEX and Secretary General of the Emirates Falconers’ Club, emphasised that ADIHEX is not only an international forum for the manufacturers of hunting equipment and weapons, and those interested in land and sea trips, or fans of falconry and equestrian, but rather hosts participation by craftsmen who are in harmony with the event’s essence and content, which embodies history and heritage and simulates the ancient environment, as they are derived from the UAE’s authentic customs and traditions, which contributes to ensuring the sustainability and promotion of handicrafts.

The last edition witnessed a remarkable presence of various handicrafts and heritage crafts, with the participation of several entities, the most important of which was Al Ghadeer UAE Crafts Foundation, one of the most pioneering projects of the Emirates Red Crescent Authority, under the patronage of Her Highness Sheikha Shamsa bint Hamdan Al Nahyan, assistant of the President of the Red Crescent Authority for Women’s Affairs, which aims to empower low income women working in the field of sustainable crafts, raise capabilities and skills in designing, manufacturing and marketing local products, and preserve heritage crafts. More than 200 female artisans from different parts of the UAE are among the members of Al Ghadeer Foundation.

Some of the female artisans emphasised the importance of their presence at ADIHEX, being a true opportunity for them to market their handworks, through which they preserve the old crafts practiced by their mothers and grandmothers, to be maintained for future generations.