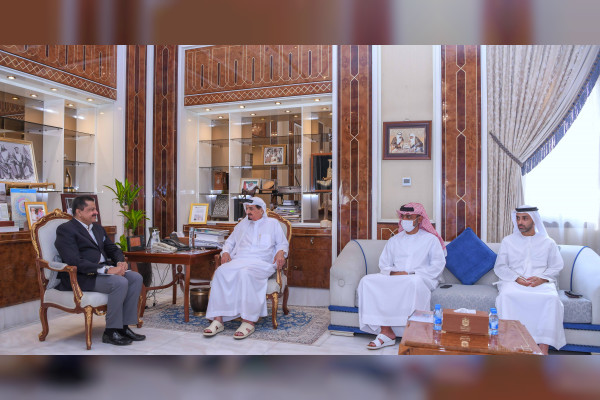 He made this statement while receiving a delegation from the Thumbay Group, chaired by Dr. Thumbay Moideen, President and Founder of the Group, at the Ruler’s Court, today.

During the meeting, H.H. Sheikh Humaid highlighted the group’s leading role in the region, noting that the Thumbay Medicity in Ajman is a regional centre for medical education and advanced healthcare research.

He then lauded the significant efforts of the Gulf Medical University in training doctors and new graduates, as well as its keenness to train them professionally to serve the country. He congratulated the university’s family, including its administrative and teaching staff and students, on the occasion of the 25th anniversary of its establishment and the graduation of a new batch of students in November 2022.

Dr. Moideen thanked Sheikh Humaid for supporting the group and the Gulf Medical University and invited him to attend the graduation ceremony in November.

Gulf Medical University attracts students from more than 96 countries, has a faculty and staff comprising over 30 nationalities, and is the largest private medical university in the region, which includes six colleges and 28 accredited study programmes, he added, noting it has more than 2,000 full-time students, and registration priority is given to Emirati students.

He then explained the development of the university’s curriculum, which has integrated COVID-19 sciences, as well as other epidemiology-related topics.

The university and the group’s network of hospitals and academic clinics train some 20 percent of doctors and about 60 percent of healthcare specialists in the UAE, making a significant impact on the healthcare sector in the country and the entire region, Moideen said.

He also noted that the group’s laboratories conduct many tests, including daily COVID-19 RT-PCR swab tests, and two of its hospitals has more than 200 beds for accommodating and treating COVID-19 patients.

The group’s medical tourism department, which is very active in promoting medical tourism services, operates in more than 20 languages and has representative offices in over 50 countries, he further added.

The meeting was attended by a number of Sheikhs and senior officials.

Stay for Free this Summer at Tilal Liwa Hotel