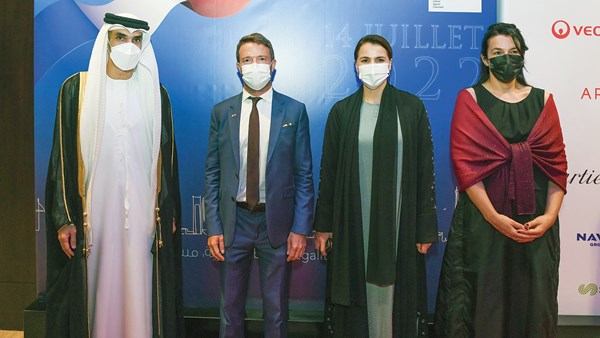 Her Excellency Maryam bint Mohammed Saeed Hareb Al Muhairi, Minister of Climate Change and Environment, and HE Dr. Last night, Foreign Trade Minister Thani bin Ahmed Al Zeyoudi attended a reception hosted by Carvier Chanel, Ambassador of the French Republic to the UAE, on the occasion of his country’s national day.
The ceremony, which was held at the Grand Hyatt Hotel in Abu Dhabi, was also attended by a number of senior officials in the country, leaders of Arab and foreign diplomatic missions accredited to the country, a number of businessmen and members of the French community residing in the country.
In his speech on this occasion, Carvier praised the wise policies of His Highness Sheikh Mohamed bin Zayed Al Nahyan, the President of the State, and the strong cooperative relations between the two countries, adding that his country is committed to strengthening areas of cooperation in different areas. He praised what the United Arab Emirates has achieved. Of great achievements in various fields. He underlined France’s eagerness to strengthen cooperation with the United Arab Emirates to serve the interests of the two friendly countries, and praised the efforts of the United Arab Emirates, the world leader in strengthening the capabilities of the people to deal with the aftermath of the “Covid-19” pandemic. . He praised the role of the UAE and its globally valued efforts to establish the values ​​of peace, tolerance and coexistence, which reflect the UAE’s well-established principles of human solidarity and the spread of goodness throughout the world to achieve global peace and prosperity.