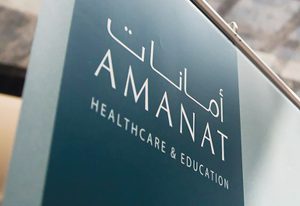 Amanat Holdings, one of the GCC’s healthcare and education investment company, has announced record financial results for the year ended December 31, 2021, with a total income of AED367.0 million, a significant five-fold increase on the AED70.6 million recorded last year.
Strong total income growth translated through to Amanat’s bottom-line, with the company reporting a record net profit of AED280.8 million, a twenty-eight fold increase from the AED10.1 million reported in FY-2020.
As a reflection of the record performance, Amanat has recommended the highest dividend payout to date of AED150 million, for which the Board of Directors will be seeking shareholders’ approval in the Company’s upcoming General Assembly Meeting.
Commenting on this year’s performance, Amanat’s Chairman, Hamad Abdulla Alshamsi, said, “2021 was a transformative year which saw us deliver impressive growth, record profitability, and solid progress on our longer-term value creation strategy.”
The year’s results set a strong foundation for the future of Amanat, demonstrating the underlying strength of our chosen industries and investments, and the effectiveness of our corporate strategy.”
Chief Executive Officer of Amanat, Dr. Mohamad Hamade, said, “We enter 2022 with continued confidence stemming from the record results delivered in 2021 and the success of our new corporate strategy. Having executed four transactions amounting to nearly AED1.7 billion, we have set the stage for our value creation strategy.
“We concluded the year with a strong portfolio of assets, either fully owned or with influential stakes. As we did in 2021, we kick off the new year with a new list of targets to achieve and a clear action plan to deliver on them.”