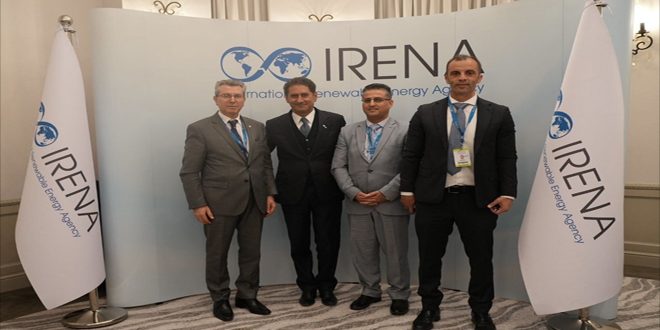 The Syrian Ambassador to the United Arab Emirates, Dr. Ghassan Abbas, discussed with the Director General of the International Renewable Energy Agency “IRENA” Francesco La Camera, ways to enhance cooperation in the field of renewable energy and its applications in order to achieve the goals and the Syrian national vision.

During the meeting, which was held on the sidelines of Syria’s participation in the twenty-third session of the IRENA Council, which was held today in the Emirati capital Abu Dhabi, the two sides discussed Syria’s national priorities in the fields of renewable and alternative energy, and the projects that are being worked on in various Syrian governorates.

The two sides agreed on the importance of reaching appropriate cooperation frameworks that meet Syria’s current needs and provide support for renewable energy projects in Syria.

The meeting was attended by the Director General of the National Center for Energy Research at the Ministry of Electricity, Engineer Younis Ali, the Secretary of the Resources and Energy Committee at the Presidency of the Council of Ministers, Eng. Fadi Masa, and the Senior Advisor to the Director General of IRENA, Stefano Marguccio.