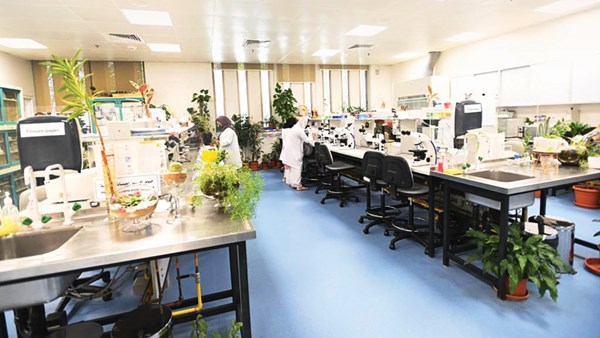 Kafu, a company specializing in technology and car service, in collaboration with United Arab Emirates University has found an innovative mechanism for planting and germinating Ghaf tree seeds in harsh climatic locations such as the desert environment using drone technology that relies on artificial intelligence.
This research is the first of its kind to be conducted in the country and represents the second phase of the Kafue Ghaf Seed Cultivation Program, which aims to plant one million seeds in the UAE to help tackle climate change. “The idea of ​​the project started when we saw wildfires in America, Brazil and parts of the Amazon rainforest, and we asked a question about how to use technology and innovation to combat an urgent problem in the world, which is climate change,” he said. Nabra Al Busaidi, Director of the Department of Sustainability and Society at Kafue.The initiative, which received full support from the Ministry of Climate Change and Environment and the Sharjah Environment and Natural Reserve Authority.
Al Busaidi added: We promised to plant one million seeds in collaboration with the Ministry of Climate Change and Environment and the environmental and nature reserves of Sharjah. The first phase witnessed the planting of 10,000 seeds, then we went to the second phase in partnership with the United Arab Emirates University, which is known as one of the best schools of agriculture and science in the region. Al Busaidi noted that the partnership with UAE University provides the opportunity to combine a range of skills from several teams in an exciting field of research with a university that is one of the most effective universities in the field of agricultural studies in the United Arab Emirates. research collaboration is the first of its kind. Its nature to improve the successful cultivation process in desert conditions by improving seed germination and water retention for the Ghaf tree and other desert plant species, helping to strengthen the UAE’s knowledge-based economy. Al Busaidi revealed that the next phase will witness the implementation of the project in the Mleiha Desert in the Emirate of Sharjah by planting about 20,000 square meters next November, with the completion of the planting of one million seeds in the country’s deserts before the end of 2023. On her part, Dr. said. Zainab Ahmed, Assistant Professor at the College of Agriculture and Medicine. The veterinarian at UAE University said that the research results helped to increase the germination capacity from 20% under natural conditions to 80% and reduce the germination period from kl. 20 days under natural conditions to 5 days after research and development operations, which will help Ghaf tree seeds overcome the difficult conditions with lack of nutrients and water in the desert, noting that choosing the right time for planting is an important factor for success of the project idea, as November is a good season for agriculture in the UAE.