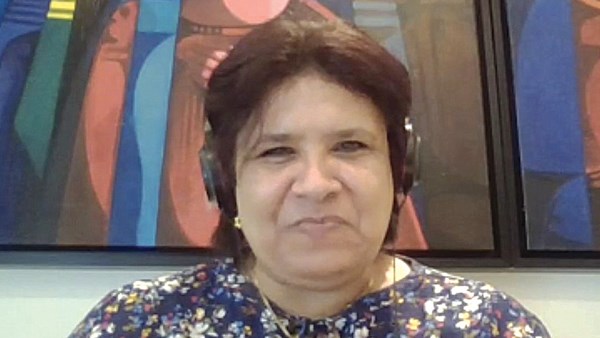 Within the activities of the Sharjah Cultural Salon, the Culture and Media Office of the Supreme Council for Family Affairs in Sharjah organized an intellectual session under the title: “The Culture of the Children’s Writer between the Language of the Child and the Adolescent,” organized by the well-known author Amal Farah, and moderated by Dr. Saeed Al-Amoudi, and the session began with an introductory video by author Amal Farah, who specializes in writing for children and has won a number of awards and honors, including the UNESCO International Prize for Tolerance in Children’s Books.
Amal Farah began her speech by noting that the title of the session suggests that there is a classification that divides the recipients into children or young people, when in fact childhood is the remaining stage of all ages.

Mind and conscience
She emphasized that children’s literature is a large part of any work that addresses the mind and conscience, serving as a space for release from stress and giving us the ability to adapt to the world and deal with it better. And that children’s literature takes into account the language and the degree of cumulative linguistic awareness, and the experience that the child has not yet lived. Also, some voices claiming that our children do not like to read is a false claim and perception that needs to be corrected, and this is proven by the intense spread of “Harry Potter” books among young Arabs and children, despite the book’s large size and it is devoid of visual elements, as is the case in some other books, and this is a proof of our children’s awareness of the importance of reading and the results of children’s literature.
Amal confirmed that one of the most difficult forms of creativity is writing for the child, and not, as some think, it is the easiest and easiest writing, since she sees that there is no literature for adults and literature for children, but on the contrary. is a language that I take care of as a writer and take care of it as I write to reach the recipient’s mind and be very influential, with a need to acknowledge. With children’s literature as an influential literature with a purpose and a value, it discusses concerns and issues, answers questions and opens a horizon of knowledge. It is this literature that makes reading sustainable and important.
Amal Farah pointed out that in the Arab world we do not often produce programs, series and films dedicated to children, but rather import them from abroad, and therefore we need a general cultural context for the child to realize the importance of reading for the development of any distinguished work. The future depends on the child, since any work presented to him is tantamount to teaching him from scratch. Therefore, the work should be thought-provoking, systematic and positively influential in order to create attention and thought in the child.

The literature of the digital age
On the existence of certain features of children’s literature today in the digital age and whether this affected the culture of writing for children, she said:
I do not mind the existence of cognitive development and development in the mechanisms and tools of publication and access to the recipient, with the need for the language, thoughts and feelings to remain constant, and also the standards of writing for the child must remain fixed. also, and the development of writing tools can be benefited with the establishment of our values ​​and ideas, writing for the child requires great awareness and open thinking, and I alluded to our ability to deal with the challenges of writing aimed at children, including the need for a sufficient degree of scientific culture and the formation of the writer’s point of view, his own philosophy, deep perceptions and his message as a human being, as well as the renewal of the culture and keeping up with the developments around him.

culture and consciousness
About the importance of raising the child’s cultural level through what we write for him, Amal Farah said: The author feeds on the reader’s time, and therefore he is responsible and accountable for this time, and the reader must feel that he does not really have wasted his money and time with this book, but on the contrary offers him thought and experience. Science and literature, as well as when we write to the child, ideas are the real engine of every work we do, although they can be abstract and intangible, so when you decide to write, you share your thoughts with the reader, and therefore must we, when we write to the child, write with the child’s spirit that lives deep within us, and in At the same time we have sought to raise the child’s culture, awareness and experience.