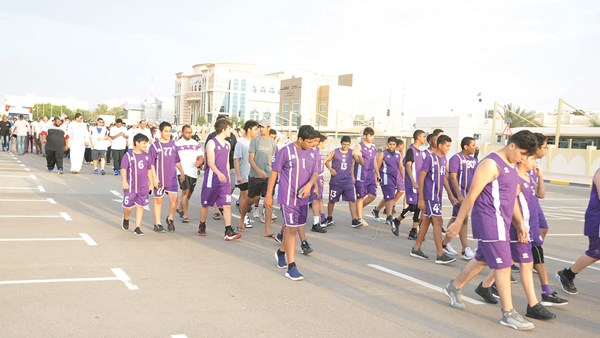 Yesterday, in the city of Al Ain, an awareness march to donate blood started from the administrative center in Al Jimi area and reached the assembly point in front of the blood bank center in Al Ain under the slogan “blood donation is a gesture of solidarity and effort to save lives”, with participation of the services of the Abu Dhabi Blood Bank and the Association Emirates Cancer and a blood campaign, we will tell you, my homeland, the Emirates Red Crescent Authority and a number of sports teams and clubs in Arab communities, with the support and escort of the Al Ain Police.
The march included a speech delivered by Mohammed Khamis Al Kaabi, Director General of Emirates Cancer Society, in which he emphasized the culture of voluntary blood donation as it is a noble value of synergy and humanity.
For his part, adviser Dr. Ali Ahmed Al-Ansari, a member of the initiative committee of the campaign “we will raise you in blood, we will raise you to the homeland”, that the idea of ​​this march came up on the occasion of the “Day without cars”, which falls on September 22 every year, noting that the march aims to educate the community about the importance of engagement. Road safety rules, besides encouraging individuals to donate blood.

152 thousand requests for bonuses instead of inflation

The Ministry of Finance is the key to development and prosperity