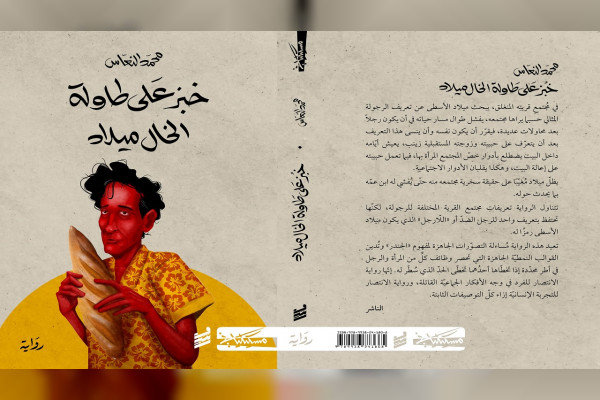 ABU DHABI, 22nd May, 2022 (WAM) — ”Bread on Uncle Milad’s Table” by Libyan debut novelist Mohamed Alnaas was announced today as the winner of the 2022 International Prize for Arabic Fiction (IPAF). The novel, published by Rashm, was named as this year’s winner by Chair of Judges Shukri Mabkhout during a ceremony in Abu Dhabi that was also streamed online.

In addition to being awarded US$50,000, funding will be provided for the English translation of Bread on Uncle Milad’s Table, and Mohamed Alnaas can expect to see an increase in book sales and international recognition.

Shukri Mabkhout, Chair of the 2022 Judges, said, ”The winning novel is written in the form of confessions of personal experience. Its plethora of detail is deftly unified by a gripping narrative. This offers a deep and meticulous critique of prevailing concepts of masculinity and femininity and the division of work between men and women, and the effect of these on both a psychological and social level. It falls into the category of novels which question cultural norms about gender. However, it is embedded in its local Arab context and steers away from any ideological treatment of the issues, as such a treatment would be contrary to the way in which fiction can present multiple points of view.

Professor Yasir Suleiman, Chair of the Board of Trustees, said, ”Bread on Uncle Milad’s Table is the captivating story of one man, Milad, who ponders his life as it unfolds in an outwardly fractured but seamlessly braided continuum at the subterranean level. The narrative carries the reader effortlessly through Milad’s journey, with its many twists and turns, revealing his alienation from the norms of a society that values a manly interpretation of masculinity. Never affected, the language of the novel is an excellent testimony to the malleability of the high register of the Arabic language and its ability to deal with intimate matters of the body and soul with naturalness and ease. Sometimes wistful, but always lyrical the narrative succeeds in evoking a conflicted cultural fabric that fuses time with place in a Libyan milieu that speaks to and for Arabs everywhere.

Bread on Uncle Milad’s Table is a unique story based in Libya. In the closed society of his village, Milad strives to live up to the definition of ideal masculinity, as his society views it. However, after all his best efforts, he fails to be ‘a man’, and after meeting his sweetheart and wife-to-be, Zeinab, decides to forget about this definition and be himself. Living at home, he performs the tasks which his society reserves for women, while Zeinab works and supports the family. Milad is unaware of how he is mocked in the village until his nephew breaks it to him. Bread on Uncle Milad’s Table questions static ideas of gender and champions the individual in the face of destructive ideas adopted by the majority.

Mohamed Alnaas is a short story writer and journalist from Libya, born in 1991. He obtained a BA in Electrical Engineering from the University of Tripoli in 2014, and his short story collection Blue Blood was published in 2020. Bread on Uncle Milad’s Table (2021) is his first novel and he wrote it in just six months during lockdown and whilst Tripoli was under bombardment. He says writing the book was his “refuge from insanity” amidst the news of Covid and war.

At 31, Alnaas is the youngest writer to win the International Prize for Arabic Fiction and the first Libyan. Bread on Uncle Milad’s Table was published with support from the Libyan Arete Foundation.

Bread on Uncle Milad’s Table was chosen by the judges as the best work of fiction published in Arabic between 1st July 2020 and 30th June 2021. It was chosen from a shortlist of six novels by authors from Egypt, Kuwait, Libya, Morocco, Oman and, for the first time, the UAE. The shortlisted finalists Khalid Al Nassrallah, Tareq Imam, Reem Al Kamali, Bushra Khalfan and Mohsine Loukili will each receive US$10,000.

‘Build a shared future for all life’, urges UN chief on Biodiversity Day