CELEBRATE THE JUNE PARTIES IN BRAZIL 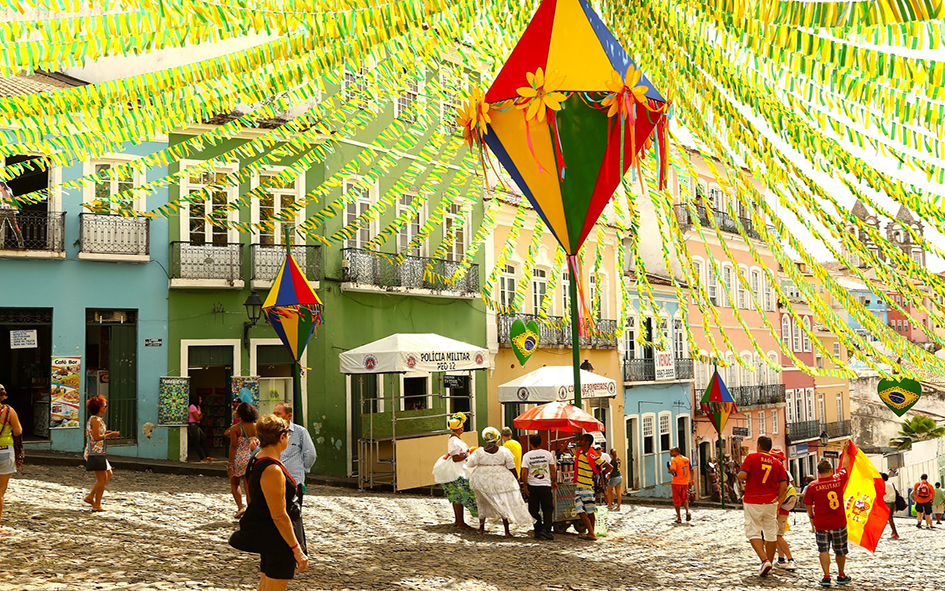 Discover the unique cultural event in the Northeast of Brazil.

Dubai, United Arab Emirates, May 20 2022 – After the Carnaval parades in Rio and São Paulo, Brazil gets ready for its next big party. The June Parties take over the country, especially in the Northeast, where they are widespread and very popular. Such as other great festivals in Brazil, the June Parties are joyful for tourists that want to discover a unique experience, the hospitality and folklore of the Brazilians. Cities and villages dress up and show off in friendly competition with each other. Bonfires are lit and revellers wear costumes from the 19th century to show up the traditions, which began to celebrate the June harvest.

June Parties are known for the Square Dance competitions. Square is a group dance performed in pairs, with a specific choreography based on traditional steps. In every traditional Square, there are two important characters: the groom and the bride. The dance itself represents the holding of the wedding feast. In addition to the bride and groom, other traditional characters in the script are the priest, the bride’s father, the judge and the police chief. Forró, a traditional music genre from the region, is another cultural highlight. People are invited to dance in pairs to the sound of accordions and triangles.

Another highlight of the June Parties is the traditional cuisine, with many recipes exclusive to the festivities. The food and the drinks are served with a lot of colour and flavour and are prepared mostly with products such as cassava, corn, and peanuts. At all places, in every evening, local delicacies like pamonha, a boiled paste made from sweet corn whisked in coconut milk, typically served wrapped in corn husks; quentão, a hot drink that mixes ginger, cloves, cinnamon boiled with cachaça; canjica, made from corn, grated coconut or peanuts, sugar and milk; cornbread, tapioca cake and many others mouth-watering options.

The city has a countryside charm, full of tourist attractions, especially due to the strong culture of handicrafts in clay. Caruaru is one of the main centres of June festivals in the Northeast of Brazil, thus receiving thousands of people every year. The Luiz Gonzaga Events Centre, named after a famous Brazilian singer and accordionist, is one of the main attractions during the festive days and welcomes an average audience of 100 thousand people per day.

In 2019, the last edition before the pandemic, the event had a massive presence of about 3.2 million people during the 30 days of festivity. In total, 24 entertainment centres both in the city and in the countryside ensured the festivities. The period had a total of 815 presentations, in addition to 500 artists hired, especially for the Luiz Gonzaga Events Centre, with 65% of the total attractions being performed by local artists.

The city hosts the Clay Museum, another Caruaru tradition another attraction to discover during the June Parties. The museum has about 2,300 ceramic pieces, many of them produced by artisans from Alto do Moura, a neighbourhood in the city known for handcraft production, including original pieces by Mestre Vitalino and Mestre Galdino, considered the greatest artists in the history of clay art in Brazil.

Caruaru is located 135 km from Recife International Airport (REC). Tourists can rent a car at the airport or take a bus at the Interstate Bus Station.

The festival in Campina Grande, officially called the “Biggest June Party of the World”, attracts up to 2.5 million people during the thirty days of festivities. The main stage, named “People’s Park”, has an area of ​​42,000 square meters as is decorated with replicas of the destination’s historic buildings, that makes tourists feel like they’re in a village in the countryside. The highlights for music lovers are the Forró Islands, where the music and dance never stop, receiving great names of Brazilian music from the northeast region.

The Biggest June Party of the World also pleases all palates with more than 150 options of places to discover the typical Festa Junina foods within the festival and their traditional corn-based flavours.

Those who visit Campina Grande and want to take some souvenirs home can visit Vila do Artesão. The place is full of stands with typical handcrafts from the northeast region. In addition to doing some shopping, it will be possible to enjoy the forró that goes on at the fair and some typical foods. There are Square Dance presentations to brighten up the tour even more.

Campina Grande is located 130 km from João Pessoa International Airport (JPA). Tourists can rent a car at the airport or take a bus at the Interstate Bus Station.

In Salvador, the festivities are concentrated in the Expo Park and in Pelourinho, the historic centre of the city, when dances and folkloric groups take over the streets. In Pelourinho, the cobblestone slopes are coloured by the June Party flags, another traditional decoration from the event. The stages for the presentation of the bands are set up in Terreiro de Jesus and in the squares of Pelourinho. In addition to the lively rhythm of forró, the Square Dance also guarantee the spectacle of the June Party festivities.

It is tradition to set up large bonfires in celebration in different shapes: square, circular and triangular bonfires. Another attraction of Salvador that is flooded by the animation and joy of the June festivals is Castro Alves Square. The square serves as the setting for great forró shows with artists of national and state renown. In the city, the typical food of the June festivals is mixed with the famous local cuisine, such as the famous acarajé, a deep-fried dumpling made of beans with shrimp stuffing and spices.

Floyd Mayweather vs Don Moore time: When are ring walks in UK and US for fight tonight?