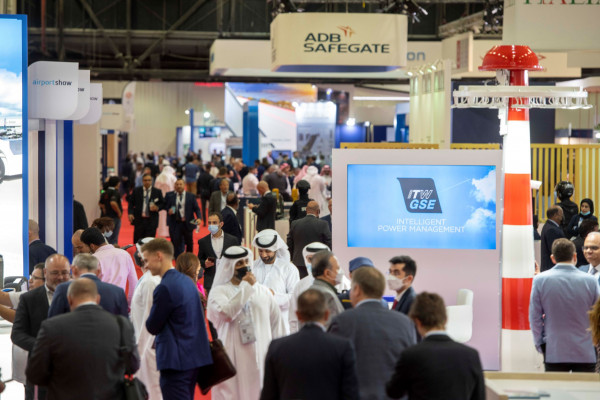 DUBAI, 19th May, 2022 (WAM) — The 21st edition of the annual Dubai Airport Exhibition, the largest annual airport event in the world, concluded successfully as it received response from the industry exceeding expectations, despite the multiple challenges facing the civil aviation sector worldwide.

A majority of exhibitors confirmed their participation in the exhibition next year, which will be held in May 2023.

Exhibitors and participants said that the exhibition was an opportunity to meet and make deals which gave strong impetus to the global airport industry, amid high growth rates achieved by passenger traffic worldwide during the past six months. As it is, the Show was held amidst clear indications of rebound of growth in aviation industry.

Organised by RX Global (Reed Exhibitions), the world’s largest airport industry B2B platform, the exhibition had a sharp focus on sustainability to help the airport community in achieving a more sustainable airport industry that is aiming to reduce carbon footprint year on year.

The Airport Show displayed products and services from over 150 exhibitors and more than 20 countries, along with over 5,000 trade visitors and experts from the aviation industry.

The organisers said there were 100 hosted buyers and 33 entities from 18 countries. The Show facilitated 3,556 business meetings.

Firas Abu Ltaif, Exhibition Manager at RX Global (Reed Exhibitions), said, “The participation and response from exhibitors from across the world was beyond our expectation especially when the event was organised after the pandemic-induced disruption in the aviation industry. It is heartening that a majority of exhibitors and participants confirmed that they will participate in the 2023 edition of Airport Show. We expect a much more participation next year when the aviation industry will be fully recovered.”

Participants have reported they could explore collaborations and joint ventures and several companies have signed sizable deals with prospective partners. They also expressed extreme satisfaction as they received tremendous response from other participants and stakeholders which would be translated into future collaboration and strengthening of business relationships.

Khalid Ahmed Bamugabil, Senior Specialist with Saudi Airlines, said that the show was “fantastic” and could network with many vendors for new products which will help to boost business and service in the future.

DTP and ADVEEZ announced that they have entered a strategic partnership, combining DTP’s pioneering airport operations systems and regional expertise with ADVEEZ’s industry-leading ground handling telematics and Internet of Things (IoT) solutions to digitalise and improve the efficiency of airport aprons in the region.

Abdul Razzak Mikaati, Managing Director of DTP, said, “We are extremely happy that the Airport Show was a venue to finalise our deal.”

Mohammed Salah, Trade Analyst with Italian Trade Agency, said 28 companies from Italy participated in the Show and reported signing deals with their counterparts from across the aviation industry.

Markus Vogler, Sales Manager Verkaufsleiter, Trepel Airport Equipment GmbH, Germany, said the 2022 edition is much better than the pre-Covid edition. “We have been participating at this show many years in the past and this time we had more number of meetings and inquiries than the previous editions. Attending this show helped us reconnect with our existing clients and make new ones.”

Rohit Nambiar, Business Development Manager, Tele Networks International, who had participated in a couple of previous editions of the show, said this edition was extraordinary. “We had several meetings in the last three days and hope these meetings and networking will benefit our business.”

The Show also hosted the 9th edition of the Global Airport Leaders Forum, that witnessed more than 40 aviation and airport leaders from around the world presenting on various topics on airport innovation and development, air traffic management, sustainability and airport security.

One of the major highlights of this year’s Airport Show was the hosting of a sustainability zone called e-Apron alongside the Show. e-Apron was offered in partnership with dnata, to provide opportunity for electric/hybrid Ground Support Equipment (GSE) and Ground Handling Equipment (GHE) manufacturers to showcase their latest innovations.