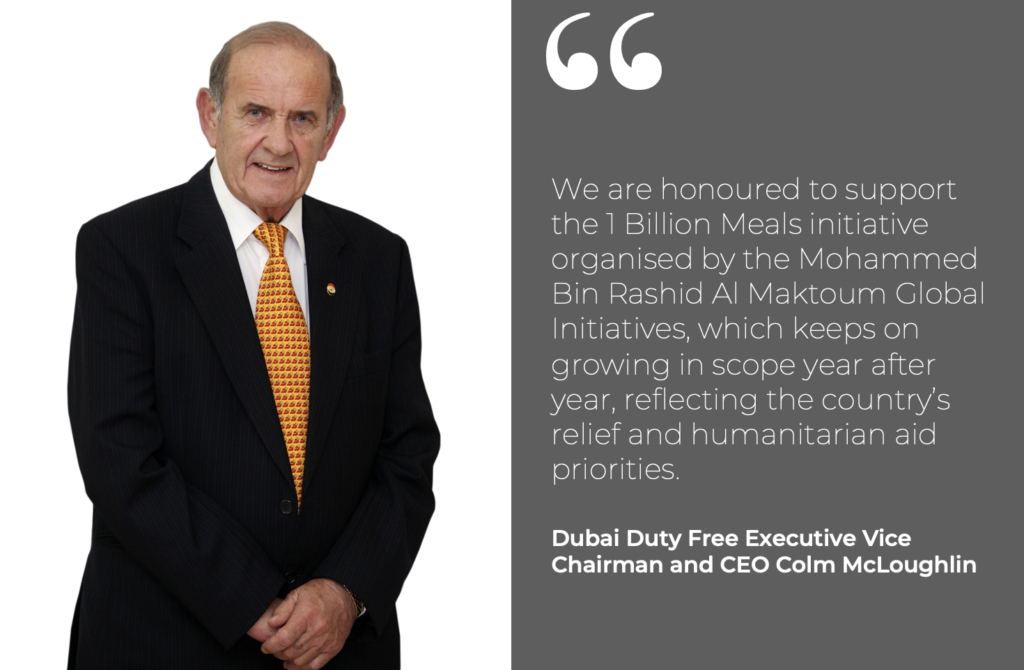 UAE. Dubai Duty Free has announced a donation of AED5 million (US$1.4 million), through its Foundation, to the 1 Billion Meals initiative, as part of its Corporate Social Responsibility drive.

Organised by Mohammed bin Rashid Al Maktoum Global Initiatives, the campaign provides food support to the underprivileged and the undernourished in 50 countries around the world, especially vulnerable groups such as children, refugees, displaced persons and those affected by disasters and crises.

Dubai Duty Free’s donation is equivalent to five million meals. The retailer is one of several UAE companies that are making a significant financial contribution to the 1 Billion Meals initiative, which is helping to alleviate the hunger experienced by 800 million people worldwide each day. The 1 Billion Meals initiative provides direct access to food supplies to some of the most disadvantaged communities around the world., It does so in coordination with the United Nations’ World Food Programme (WFP), the Food Banking Regional Network (FBRN), the Mohammed bin Rashid Al Maktoum Humanitarian and Charity Establishment (MBRCH), the United Nations High Commissioner for Refugees (UNHCR), the UAE Food Bank, as well as a number of charity and humanitarian organisations.

McLoughlin said: “We are honoured to support the 1 Billion Meals initiative organised by the Mohammed Bin Rashid Al Maktoum Global Initiatives, which keeps on growing in scope year after year, reflecting the country’s relief and humanitarian aid priorities.

“Since we started the Dubai Duty Free Foundation in October 2004, we have been participating in worthy endeavours with several local and international charities and this great initiative by His Highness Sheikh Mohammed Bin Rashid Al Maktoum, Vice President and Prime Minister of the UAE and Ruler of Dubai, represents an exceptional opportunity for Dubai Duty Free to celebrate and show its gratitude to the nation and its leadership that inspires and encourages people to help [those] in need.”

Through the Dubai Duty Free Foundation, the airport retailer continues to actively support important social and charitable initiatives during the Holy Month of Ramadan, especially those in which the people of the UAE can share and collaborate.

To date the Dubai Duty Free Foundation has supported 52 local and 58 overseas charities, as part of its commitment to the community.

Donors can contribute to the 1 Billion Meals initiative through the following donation channels: the campaign’s official website: www.1billionmeals.ae; bank transfer to the campaign’s account at Emirates NBD, number: AE300260001015333439802.

Donors can also opt to donate AED1 a day through a monthly subscription by sending “Meal” or “وجبة” via SMS to 1020 on the du network or 1110 on the Etisalat network. Donations can also be made through campaign’s call centre via a toll-free number 8009999.