Dubai Police briefs its counterpart in Fujairah about its media experience 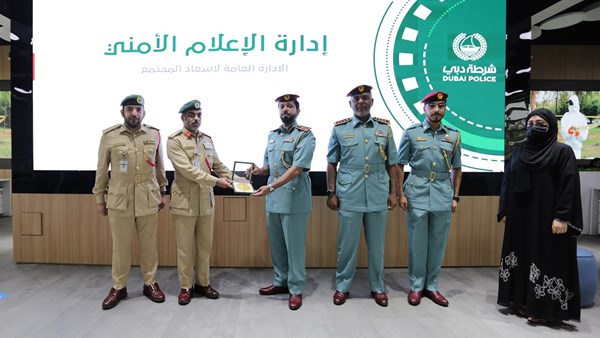 The Security Media Department of the General Department of Community Happiness of Dubai Police received a delegation from the General Command of Fujairah Police, led by Colonel Khalid Abdullah Al-Waal Al-Dhanhani, Director of the Office of the Commander-in-Chief of Fujairah Police Al-Marri, Head of the Department of Social communications, in the presence of Captain Muhammad Al-Basri, head of media and public relations at Fujairah Police, and a number of officials from both sides, to see the police’s experience in the media field.
Lieutenant Colonel Al Nuaimi welcomed the delegation and emphasized that the Dubai Police is keen to transfer its knowledge, experience and expertise in various disciplines to all parties.
Major Khaled Al-Marri reviewed the organizational structure of the Security Media Department and explained the role of each department in the production of media content.