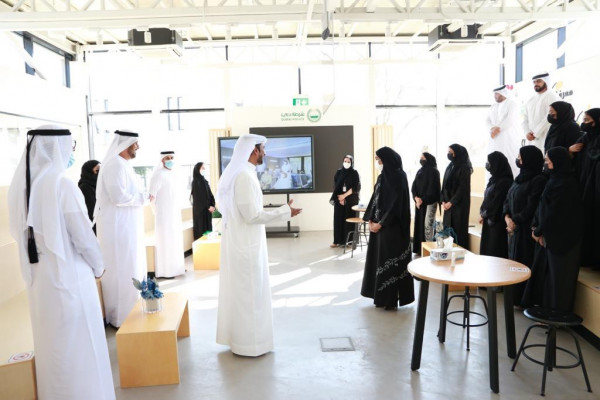 DUBAI, 5th March, 2022 (WAM) — The Dubai Police Crime Prevention Department has recently signed a Community Police Charter with Ferjan Dubai initiative to mark a new collaboration with the community to ensure people’s happiness and make the emirate’s neighbourhoods a safe place to live.

Ferjan Dubai, as an initiative launched and carried out by several young Emiratis, shares the force its objectives in enhancing community engagement and bringing neighbours together.

The signing ceremony was attended by Captain Hammoud Mohammed Al-Muqbali, Head of the Community Police Department in the Crime Prevention Department, and Alya Al Shamlan, Founder of Ferjan Dubai Initiative, in the presence of other officers and employees from both sides.

Cap. Al-Muqbali applauded the initiative concept and the youth’s enthusiasm to serve their neighbourhoods. He stressed that Dubai Police is keen to establish partnerships and join forces with the community members, believing that safety is a joint responsibility between law enforcement agencies and individuals.

“Reaching out to Ferjan Dubai is one of the force’s attempts to open a communication channel with the youth to benefit from their ideas and suggestions to serve the residential areas better,” Cap. Al-Muqbali added.

“This collaboration is an addition to the Dubai Police’s ‘Policeman in Your Neighbourhood’ initiative, in which a Dubai Police officer acts as a liaison between Dubai citizens and residents and the General Command of the Dubai Police, to monitor and solve problems in residential areas,” Cap. Al-Muqbali elaborated.

“Both initiatives aim at strengthening community engagement in neighbourhoods. Benefiting from the youth energy, Dubai Police can prevent negative phenomena from happening in the community and enhance safety,” Cap. Al-Muqbali continued.

Meanwhile, Al Shamlan expressed her excitement for this collaboration and clarified that the initiative is currently run by 22 people, managing 10 social media accounts concerned with the latest local news for 15 neighbourhoods around Dubai.

“We wish to help Dubai residents in knowing their neighbourhoods better and provide them with useful information related to their day-to-day lives,” Al Shamlan said.

“Community engagement is our ultimate goal.” “We want to revive the old notion of solidarity and social coherence of “Freej” (the singular form of Ferjan which means neighbourhood in Emirati dialect), “We plan to achieve that by highlighting each neighbourhood attractions, people with talents and specialities, and small home businesses to help build a sustainable relationship between neighbours in Dubai,” Al Shamlan continued.

“We are also concerned with raising residents’ awareness on environment and health issues while covering the news of local schools, parks, and facilities and community events during special occasions. Last but not least, attending to their concerns and inquiries,” Al Shamlan concluded.

8,176 doses of the COVID-19 vaccine administered during past 24 hours: MoHAP

Given the importance of the restaurant in Dubai’s culinary culture, “Adidas” launches...