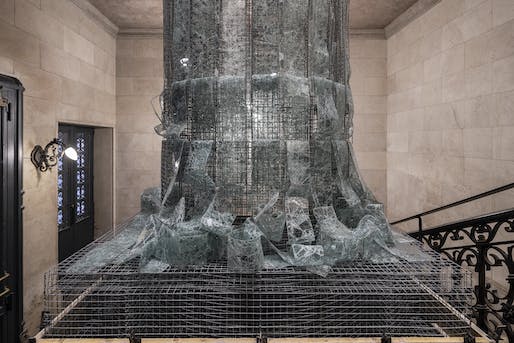 To coincide with the long-awaited public opening of Venice’s iconic Procuratie Vecchie, Italian artist Edoardo Tresoldi has produced an installation that helps highlight the mission and function of its newly reclaimed space.

Titled ‘Monumento’ and taking as its backdrop the 16th-century monumental staircase restored by David Chipperfield Architects as part of its five-year renovation project, the installation presents a subversion of the traditional thinking and rhetoric that surrounds monuments worldwide.

Using his standby wire mesh material, Tresoldi was able to replicate past installations in New York and Abu Dhabi using the column itself as a kind of 50-foot-high metaphorical guidepost standing between societal values and contemporary life. Developed in collaboration with architect Carlotta Franco and with support from GICO Studio, the wrapped column is also meant to be as much in dialog with the space around it as it is expressive of a global fragility that is befitting the mission of the building’s newest tenant, an international refugee NGO called The Human Safety Net.

“Monumental architecture is a song that omits the function to ritualize a thought through a plastic act,” the artist told Italian Elle Decor. “The history of peoples is a hereditary flow of rhetorical figures that cyclically recur; they redefine their meanings and establish symbolisms that not only we have learned to read but which, generation after generation, we have absorbed as a sort of latent language of the collective unconscious. Thus, stripping a monument of its symbolism, what remains is a virtuous and melancholy lyric song, detached and solemn, yet in it seeks contact because it is born to express itself, to be first an artifact and gesture and then a concept and presence.”

Similar articles on Archinect that may interest you…

RTA clamps down on unlicensed taxis and fare dodgers