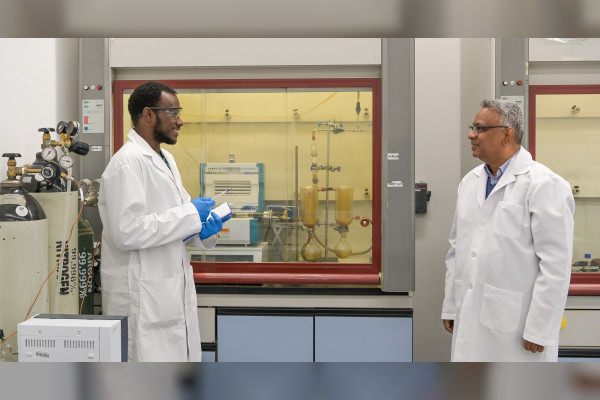 ABU DHABI, 26th May, 2022 (WAM) — Emirates Global Aluminium (EGA), the largest industrial company in the UAE outside oil and gas, today announced a collaboration with the American University of Sharjah (AUS)’s College of Engineering to research the economic and environmental benefits of re-using of food waste to enrich manufactured soils made from bauxite residue, and further applications in waste-to-energy.

The AED1.6 million three-year research project is the second phase of the EGA’s cooperation with the American University of Sharjah to re-use bauxite residue, a by-product stream from alumina refining.

The new research follows three years of work between the two organisations to establish technically how food waste as biochar – a type of charcoal-based on indigenous agricultural knowledge from the Amazon basin – can be combined with treated bauxite residue to create a manufactured soil for greening and other purposes.

Other by-products from food waste in the potential treatment process, bio-oil and bio-gas, were also identified in the first phase of research, with potential waste-to-energy uses.

The new research aims to show that an integrated process would be environmentally and economically beneficial and enable the UAE’s significant food waste generation to contribute not only to bauxite residue re-use but also to waste-to-energy projects.

The recovery of food waste as designer biochar and as bio-energy products would constitute a significant innovation at the global level. The work could contribute directly to the UAE’s aim of reducing waste-to-landfill by 75 per cent by 2030, lowering greenhouse gas emissions, optimising local resources, and through R&D, contributing to the overall development of the UAE knowledge economy.

The EGA has also been conducting research in-house with other institutions including The University of Queensland’s School of Agriculture and Food Sciences. Earlier this year, the EGA announced the company is to build a pilot plant in Al Taweelah to convert bauxite residue into manufactured soil products. The pilot plant is thought to be the first of its kind in the world.

Abdalla Al Zarooni, Vice President – Technology Development and Transfer at EGA, said, “We are always looking at solutions to reduce the waste streams of our industrial activities, in addition to supporting the UAE’s Net Zero ambitions and landfill reduction goals. Following the technical breakthrough of EGA’s Turba process, which converts bauxite residue into manufactured soil, we look forward to our researchers examining the further economic and environmental benefits of using food waste to generate the required biochar for this manufactured soil.”

Dr. Yassir Makkawi, Project lead investigator and Professor of Chemical Engineering at AUS, said, “Sustainable management of both industrial and food waste is one of the main challenges of governments as they seek to meet their targets for waste minimisation and reducing CO2 emissions. With environmental outcomes, an increasing concern of the public and strict regulations in place governing waste disposal and landfill, finding novel solutions is becoming more and more important. This project will now contribute to the UAE’s ability to successfully manage industrial and food waste in a way that has less of a detrimental impact on the environment than has traditionally been the case.”