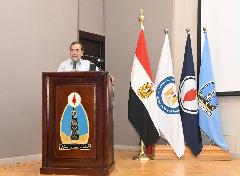 Cairo – Mubasher: The Egyptian Minister of Petroleum and Mineral Resources, Tarek El-Molla, has laid the cornerstone of a project to upgrade the General Petroleum Company’s El-Hamd station to an integrated treatment plant with an investment cost of EGP 1 billion.

The plant is expected to improve treatment processes and boost operating and treatment capacities to keep up with the increasing production of the General Petroleum Company and its sister companies operating in Ras Ghareb and Ras Shukeir in the Gulf of Suez, El-Molla said in a statement on Sunday.

Moreover, an industrial waste treatment unit will be implemented in full compliance with the environment protection law at an estimated cost of EGP 510 million.

During a visit to the facilities at Ras Ghareb and Ras Shukeir, El-Molla reviewed the business results of West Bakr Petroleum Company and Dara Petroleum Company (Petrodara) which showed a rise in reserve rates at their concession areas and an increase in daily production of crude oil to about 12,000 barrels per day through 95 wells in the Eastern and Western Deserts.

Future plans include the drilling of 16 new wells at a total cost of $23 million which are expected to add about 5,000 barrels of crude oil per day.

Additionally, Gulf of Suez Petroleum Co (GUPCO) has implemented a new seismic survey in the Gulf of Suez at a cost of $49 million in partnership with WesternGeco. A total of seven new developmental wells will be drilled and a technical study will be carried out to drill six new wells, including three exploratory wells.