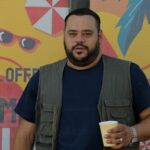 “Abu Saddam” was released in December 2021 and is directed by Egyptian filmmaker Nadine Khan.

The film tells the story of an experienced truck driver, played by Mamdouh, who gets a transportation mission on Egypt’s North Coast Road after he stopped working for years.

His assistant goes with him on the journey, and they face unexpected situations that get out of control.

MAFF is Europe’s largest film festival featuring Arab cinema and the only one in Scandinavia.

The festival launched in 2011 and has since become a platform for Arab films in the European region. It is the largest festival dedicated to Arab films outside the Middle East.

Founded by Swedish-Palestinian director and producer Mouhamed Keblawi, the festival began as a meeting point for Arab cinema in Sweden and Europe and has been growing since.

The 12th edition MAFF, which kicked off on May 4 and runs until May 9, had a great turnout of attendees including famous actors Georges Khabbaz, Ahmed Magdy and Monther Rayahnah.
Main category: LifestyleArt & CultureTags: Mohamed MamdouhAbu SaddamMalmo Arab Film Festival