Emirates News Agency – During his visit to the National Aquarium, Hamdan bin Zayed briefed on efforts to rehabilitate marine species in Abu Dhabi 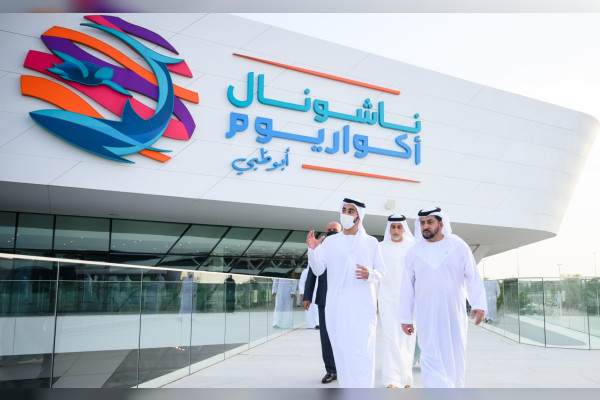 ABU DHABI, 5th August / WAM / His Highness Sheikh Hamdan bin Zayed Al Nahyan, Representative of the Ruler of Al Dhafra Region and Chairman of the Board of the Environment Agency – Abu Dhabi, was briefed on the efforts to rehabilitate sea turtles and marine life in The Emirate of Abu Dhabi through the marine life-saving program implemented by the Authority in collaboration with The National Aquarium, where rescued turtles are treated and provided with the most advanced veterinary care before being released back into their natural habitats.

This happened during his visit to the National Aquarium, the largest aquarium of its kind in the region, accompanied by Sheikh Mohammed bin Hamdan bin Zayed Al Nahyan, his sons, Ahmed Matar Al Dhaheri, Director of the Office of His Highness the Ruler’s Representative in Al Dhafra Region , and Dr. Sheikha Salem Al Dhaheri Secretary General of the Environmental Protection Agency – Abu Dhabi, Saeed bin Omair bin Yousef, Chairman of the Board of the National Aquarium, and a number of officials.

His Highness Sheikh Hamdan bin Zayed Al Nahyan began the visit by visiting the Specialized Center for the Rehabilitation of Turtles and Marine Biology, which is dedicated to protecting marine life in Abu Dhabi. Since its launch in 2020, the program has successfully rescued, rehabilitated and released many sea turtles and other rare marine species.

His Highness was also briefed on the ground-breaking educational experiences in public awareness of the different sections of the society, as the National Aquarium gives the public the opportunity to learn about the different types of marine animals, such as the marine environment of the Emirate of Abu Dhabi port.

His Highness’ tour included a visit to a number of sections and facilities included in the project, namely the Natural Treasures of the Emirates, the Depths of the Mediterranean, the Atlantic Cave, the Forgotten Submarine, the Ring of Fire, the Magic of the Sea, the Frozen Sea, the Submerged Forest and the Forest Garden.

His Highness also visited the section on the island of Bu Tinah, which shows the most unique features of the island and its picturesque nature, and got acquainted with a variety of fish and sharks that live in the waters of the Arabian Gulf and various oceans around the world.

His Highness Sheikh Hamdan bin Zayed Al Nahyan was briefed on the “Water Canal” project, which includes a number of sports and entertainment facilities, cinemas and around 146 commercial units spread over 91 indoor and outdoor restaurants and cafes and 55 shops.

During the visit, His Highness Sheikh Hamdan bin Zayed Al Nahyan inaugurated the first boat of its kind specialized in saving aquatic life in the Emirate of Abu Dhabi, increasing the effectiveness of the response to cases of surveillance of affected turtles, fish and stingers and transfers. them to the specialized center for rehabilitation.

At the end of the visit, His Highness Sheikh Hamdan bin Zayed Al Nahyan said: “Our marine environment includes some of the most diverse ecosystems on the planet, yet it is subject to many pressures that affect its sustainability and biodiversity.”

His Highness added, “Since its establishment, the Environment Agency – Abu Dhabi has sought to protect these marine ecosystems and address the loss of biodiversity through the implementation of many programs and initiatives to study them, monitor marine species and protect their natural habitats using the latest innovative monitoring techniques .”

His Highness indicated that the dedication of the boat will contribute to the protection of saving marine life in a timely manner to be treated, rehabilitated and released into their natural environment.

His Highness praised the efforts of the authorities in collaboration with the National Aquarium to rehabilitate turtles and release them into their natural environment to help preserve this species, noting that this intensive effort contributes to the protection of sea turtles exposed to human impact due to .to their longevity and dependence on coastal and marine habitats that are often pressured by human activities.

His Highness said that these efforts effectively contribute to the implementation of the National Plan for the Conservation of Sea Turtles, which was developed by the Authority in collaboration with the Ministry of Climate Change and Environment, and which was launched with the aim of effectively protecting the sea. turtles and their natural habitats to ensure their sustainability in the country’s waters.

On his part, Saeed bin Omair bin Yousef expressed his joy at the visit of His Highness Sheikh Hamdan bin Zayed Al Nahyan to the National Aquarium to launch several initiatives aimed at saving aquatic life in collaboration with the Environmental Protection Agency – Abu Dhabi. to respond to marine emergencies and increase the likelihood of their survival in the event of harm. Work is also underway to equip a wildlife rescue ambulance to provide immediate first aid to animal patients who are often present in remote areas. We are working with the Danish Environmental Protection Agency – Abu Dhabi to intensify our efforts to protect local animals, especially endangered species.”

It is noteworthy that in 2020 the Environmental Protection Agency – Abu Dhabi had signed a cooperation agreement with the National Aquarium to strengthen efforts to preserve wildlife in the emirate.

Through this partnership, the largest center in the region dedicated to the rehabilitation of sea turtles was launched. The launch of this center aims to increase efforts to preserve biodiversity in the emirate.

Under the agreement, the National Aquarium fully supports the rehabilitation of sea turtles by providing full veterinary care, in-house veterinary care and general animal care until full recovery and then return to the wild.

The National Aquarium also supports the Authority in the research and studies it conducts by providing satellite tracking devices for wildlife.

THE GREEN PLANET WELCOMES THE FIRST ANACONDAS IN DUBAI