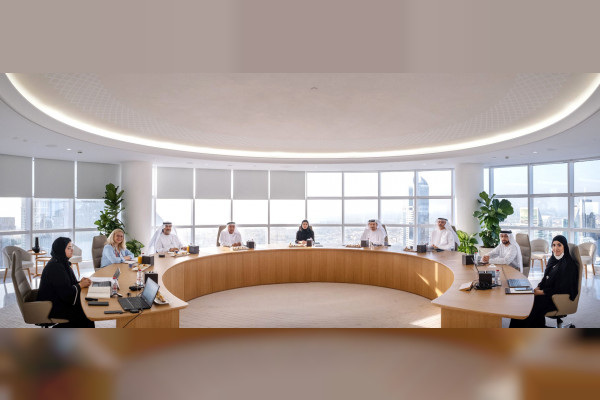 DUBAI, 18th March, 2022 (WAM) — The Emirates Scientists Council has held its second meeting, for its third cycle. Chaired by Sarah bint Yousif Al Amiri, Minister of State for Advanced Technology and Chairperson of the Council, the meeting sought to outline how it can support national competencies in science and technology and enable them in priority research sectors.

During the meeting, the Council endorsed/approved nine programmes presented by committee chairs which aim to build a conducive environment for innovation and scientific research, as well as building up a generation of scientists in various fields. This aligns with the Council’s efforts to empower the science and advanced technology sector in the UAE to keep pace with global scientific advancements and provide an enabling environment to scientists in various disciplines.

The Council identified three main pillars in the next phase, which include enhancing and empowering human capital in the research sector, stimulating the recruitment and retention of highly qualified scientists, and enhancing cooperation between academic institutions and research centres.

Al Amiri highlighted her appreciation for the efforts of the Council members and the committee chairs in developing programmes and initiatives that support scientists. She stressed that these efforts are in line with the directives of the nation’s wise leadership to enhance the position of scientists, empower them and align them with national priorities to achieve scientific growth and socioeconomic prosperity, and to develop solutions to priority challenges in cooperation with the scientific community in line with Principles of the 50.

She said, “The Emirates Scientists Council contributes to advancing the UAE’s development process in accordance with innovative scientific visions and a forward-looking view of the future. It enhances the UAE leadership position among developed nations and builds bridges between knowledge economies and advanced priority industries. The Council develops plans that align with the country’s vision to advance the UAE’s R&D ecosystem, support comprehensive development, and help create an environment that stimulates innovation and scientific research. These efforts also contribute to nurturing a generation of scientists in various scientific fields and ensure the sustainability of the scientific sector.”

In the presence of the heads and deputies of the working committees under the Mohammed bin Rashid Academy for Scientists, the Council was briefed on a set of initiatives from each committee, who presented two projects for approval. Dr. John Burt, Programme Head for Environmental Studies and Associate Professor of Biology at New York University Abu Dhabi, and Chairman of the Science in Media Committee, presented ways to enhance scientific culture in the UAE by providing both the scientific community and media outlets with the tools to seamlessly present and communicate scientific information. This could include the launch of media programmes that highlight the role of scientific research in the UAE and the use of social media and other channels to promote scientific awareness.

Dr. Rashid Al Ghafri, Director of Training and Development Department at Dubai Police and Chairman of the Youth in Science Committee, presented ways to promote opportunities for young people in scientific professions and increase their representation in the scientific community. The committee also presented a project for linking young scientific talents with pioneers in various relevant fields and highlighting creative young scientists. They also launched a series of scientific symposia targeting this segment, presenting a detailed study on the current challenges facing the youth in the research ecosystem, best international practices, and proposed programmes to support the youth in this ecosystem.

Dr. Saeeda Al Marzouqi, Associate Professor at UAE University, Head of Pathology Department and Consultant Pathologist at Tawam Hospital and Chair of the Women in Sciences Committee, discussed ways to ensure diversity and support women’s efforts in STEM fields, ways to enhance their role in the science sector in the country, and the challenges they face in this field.

For his part, Dr. Ammar Nayfeh, Assistant Professor of Nanotechnology at Khalifa University of Science and Technology and Vice-Chairman of the Public Outreach Committee, presented the Research Experience Scientist initiative, a seven-week internship where students shadow a researcher or scientist to inspire a new generation of scientists and researchers. The committee also pitched a Science Conference to highlight the top research conducted in the UAE the past year.

Dr. Ozgur Sinanoğlu, Professor of Electrical and Electronics Engineering and Director of the Centre for Cyber Security at New York University Abu Dhabi, and Chair of the Membership Selection Committee, and Dr. Abiola Senok, Professor of Microbiology and Infectious Diseases at the Mohammed bin Rashid University of Medicine and Health Sciences and Vice Chair of the Committee, presented mechanisms for reviewing and updating membership selection criteria to enhance the global status of the Mohammed bin Rashid Academy for Scientists.