Emirates Today celebrates 17 years of service to the nation 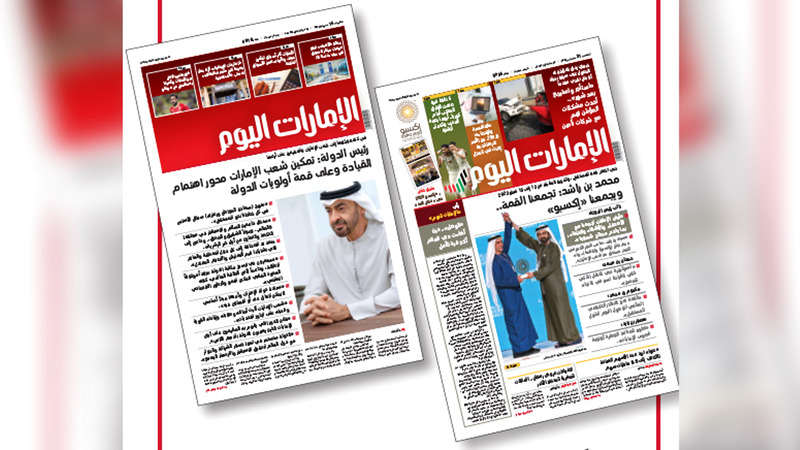 17 years have passed since the publication of the first issue of “Emirates Today” .. a young newspaper with a contemporary thought .. launched from the heart of Dubai, to convey in words, images and video the features of the great and accelerating renaissance of the UAE to the world.

“Emirates Today” was launched with young patriots with one goal in mind: to serve the country and the citizen.

Year after year, the newspaper continues its media journey, shedding light on the state’s achievements, the visions of its wise leadership and its government’s successive successes on Earth and in space.

Entering its 18th year, “Emirates Today” keeps pace with the country’s successes in digital development, with electronic platforms that include four million active followers from within and outside the country, achieving nearly 14 million monthly reads of its website pages. an advanced position among the major Arab newspapers, and the most followed and popular in the Arab world.

“Emirates Today” begins a new year bearing great appreciation of the reader who gave it his trust and placed it in the first place among the most followed Arabic local newspapers in the country on the platforms of Twitter (two million and 455,000 followers) and Instagram (655 thousand followers) Thanks to him, the newspaper’s account on Twitter has registered more than 230 million interactions and impressions during the last 12 months.

Expressions of gratitude are not enough for the reader to die his right… after “Emirates Today” culminated in more than 85 million impressions of visual content on the platforms “Facebook”, “Instagram” and “Twitter”; To the top of the newspaper’s content indicators for global follow-up.

With the beginning of a new year… Emirates Today renews its pledge to maintain content that does not deviate from accuracy, credibility and objectivity, contributing to the achievement of the strategy of the Dubai Media Council and Dubai Media Incorporated in conveying the bright image of the Emirates to the world, promotes national responsibility, introduces and preserves the country’s heritage and highlights Dubai’s position as a global economic and tourism center on the map of excellence, locally, regionally and internationally.