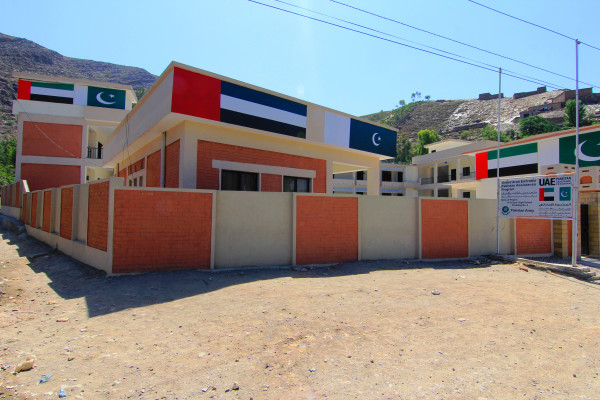 ABU DHABI, 25th September, 2022 (WAM) — The Islamic Republic of Pakistan was recently hit by devastating floods, which resulted in loss of lives and materials, affecting over 33 million people and flooding nearly one third of the country.

According to the latest statistics issued by the National Disaster Management Authority of Pakistan (NDMA), the disaster resulted in the death of more than 1,569 people, including 552 children, the injury of over 13,000 people, the displacement of about seven million people. Additionally, 5,500 schools were used as shelters for the affected people.

The floods contributed to the spread of a high rate of diseases due to drinking contaminated water. Nearly 1.9 million homes were damaged and destroyed, and more than 12.7 thousand kilometres of roads were swept. It also destroyed 390 vital bridges, 24,000 schools and educational institutes, and 1,460 health centres, in addition to the destruction of millions of hectares of land and agricultural crops, and the death of 936,000 heads of livestock, NDMA’s statistics said.

Since late 2010, the UAE, under the directives of the late Sheikh Khalifa bin Zayed Al Nahyan, and the follow-up of His President His Highness Sheikh Mohamed bin Zayed Al Nahyan, and H.H. Sheikh Mansour bin Zayed Al Nahyan, Deputy Prime Minister and Minister of the Presidential Court, has supported many humanitarian and development initiatives to assist the Pakistani people and alleviate their suffering, through the implementation and completion of more than 200 vital development projects for the population of the regions and areas affected by the flood disaster in Pakistan, spread across roads, bridges, health, education, water and agriculture.

Following this year’s floods, Emirati development projects in flood-affected regions, such as Khyber Pakhtunkhwa and Balochistan provinces, have proven their high quality and multiple benefits to the residents of those areas, thanks to the vision and humanitarian principles that were adopted during the planning and implementation stages, leading to high-end achievement with advanced specifications and modern and integrated equipment.

In that regard, Emirati hospitals projects contributed to receiving the injured and providing them with treatment, emergency rescue and medicine services.

Roads and bridges projects have also contributed to saving millions of lives by facilitating safe movement on roads and bridges between affected areas, preventing transportation disruptions and sustaining relief and ambulance operations. Furthermore, Emirati schools have also provided exceptional benefit by using their buildings as shelters for affected and displaced families and their children.

Abdullah Khalifa Al Ghafli, Director of the UAE Pakistan Assistance Programme, said the development projects that have been accomplished in Pakistan during the past years reflect the directives of the UAE’s wise leadership and underscore its keenness to adopt humanitarian initiatives within the framework of giving, unity and solidarity towards the Pakistani people to alleviate their human suffering, provide them with a decent life and develop infrastructure facilities in their areas.

Al Ghafli pointed out that since 2011, the UAE Pakistan Assistance Programme has pursued a large development plan to serve the community and residents of Khyber Pakhtunkhwa, Balochistan, and the tribal regions, in addition to the capital, Islamabad, with the aim of contributing to their advancement, development and progress, by implementing vital projects in many sectors, such as roads, bridges, education, health, water provision and agriculture, in addition to the implementation of several humanitarian aid campaigns, which included the distribution of food aid and shelter tents for the poor, needy and displaced populations, as well as the implementation of polio vaccination campaigns for nine consecutive years since 2014.

Al Ghafli explained that the UAE development projects had a positive impact in protecting the residents of the flood-hit areas, and mitigating the negative repercussions of the disaster. “This was consolidated in the success of over 12 hospitals and clinics that were built and equipped in various Pakistani provinces, providing specialised health care and integrated medical services from treatment and medicine to the population with efficiency and competence,” he said.

The UAE Pakistan Assistance Programme has set a high level of efficiency, quality, commitment and accuracy with global and modern standards for integrated vital projects, which had a fundamental role and a deep impact on the successful implementation of over 200 development projects in Pakistan, embodying the depth of the distinguished historical relations that bind the two countries at all political, economic and social levels, Al Ghafli affirmed.

In turn, residents of Pakistan’s flood-affected areas have expressed their thanks and appreciation to the UAE and its wise leadership for the Emirati development projects and their role in mitigating the repercussions of the floods, contributing to the protection of lives and property.