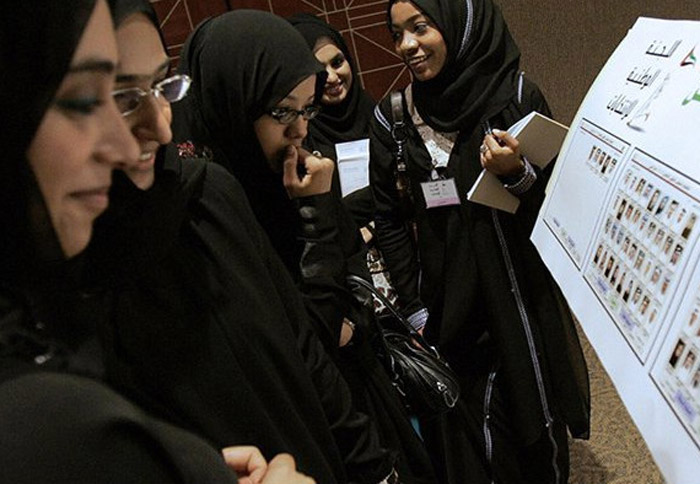 Emirati women will scale the peak of their empowerment journey during the FNC Elections 2019 to be held next October, by achieving 50 percent representation in parliament.

This is in line with the implementation of Resolution No. 01 of 2019 issued by President His Highness Sheikh Khalifa bin Zayed Al Nahyan on raising the representation of women in the FNC to 50 percent.

In the following report, the Emirates News Agency, WAM, monitors the main milestones in the empowerment of Emirati women in the parliamentary field.

The Women’s Empowerment programme launched by President His Highness Sheikh Khalifa in 2005 represented a significant milestone in the history of Emirati women, and in 2006, Emirati women participated in the first FNC elections as voters and candidates.

During the first election, Dr. Amal Qubaisi, the current FNC Speaker, won a seat in the FNC elections and eight other women were appointed in the parliament, with women representation in the FNC being 22 percent.

During the second election in 2011, women accounted for 46 percent of the total number of voters, while 85 women ran for elections. After the announcement of the election results, women maintained a 22 percent rate of representation in parliament.

The decree of the formation of the FNC in its 16th legislative chapter in November 2015 comprised nine women, and one of them won a seat in the elections, while the rest were appointed as members. One of them then went on to be appointed as the Minister of State for the Federal National Council Affairs.

The appointment of Dr. Amal Abdullah Al Qubaisi as the FNC Speaker in the 16th legislative chapter represented a historic step by the UAE, as she was the first woman in the Arab region and the Middle East to chair a parliamentary organisation.

288 applications received for ‘national’ elections within two days, including 103 from women

Registration centres for the Federal National Council, FNC, 2019 election candidates set up across the UAE continued to receive applications for the second consecutive day.

By the end of the day, the National Elections Commission received 94 applications, including 36 from women, from 8:00 to 15:00.

On the first day, amid a high turnout of candidates, the National Elections Commission received 194 applications, 67 of which were from women.

The number of candidates who applied during the first two days reached 288 in all emirates and included 103 females.

The registrations will continue until Thursday, 22nd August, 2019, according to the National Committee for the FNC 2019 elections.

The registrations began on 18th August, 2019, and will continue until next Thursday.

According to the timetable of the FNC 2019 elections, the NEC will announce the preliminary list of candidates on 25th August, 2019. The final list will be announced on 3rd September, 2019, while the campaigning will start from 8th September, 2019, and will last for 27 days.

The National Election Committee, NEC, today announced that nine candidate registration centres across the UAE are now accepting applications for Federal National Council, FNC, membership and will continue to do so until August 22, 2019.

A total of 194 candidates registered on the first day, today, for the upcoming parliamentary elections, scheduled for October 2019, 67 of whom are women.

In a press statement issued today, the NEC said the candidate registration centres across the UAE started Sunday and that the official working hours of the centers extend from 8 a.m. to 3 p.m. Sunday to Thursday.

In Abu Dhabi, candidate registration centres are located on the second floor of the Abu Dhabi Chamber of Commerce and Industry, the headquarters of the Abu Dhabi Emirates Committee, as well as the Chairman Hall of the Hazza bin Zayed Stadium, and Madinat Zayed Majlis. To date, 52 candidates from Abu Dhabi, Al Ain, and Al Dhafra have registered to participate in the upcoming FNC elections, 20 of whom are women.

In Dubai, 21 candidates applied on the first day of registration, nine of whom are women. A total of 47 applied so far in Sharjah, 15 of whom are females.

The candidate registration center in Dubai is located in the Dubai World Trade Centre, Hatta Halls C and D. In Sharjah, the candidates have submitted their applications at the center in Hall 1 of the Sharjah Advisory Council building.

Tariq Hilal Lootah, Undersecretary of the Ministry of State for Federal National Council Affairs and Chairman of the Management Committee of the FNC’s 2019 elections commended the seamless registration process and the preparedness of the Emirates Committees’ teams to receive candidate applications.

During his tour of the candidate registration centres in Dubai, Sharjah, and Ajman, His Excellency praised the efforts of the specialised teams within the Emirates Committees that are relentlessly working to raise awareness of the significance of participating in the electoral process.

He said: “I am confident in our ability to host a transparent and successful election. Participating in this endeavour is a privilege for every national, we encourage all eligible UAE nationals to nominate themselves as candidates for this important national duty, or motivate capable candidates to apply, or come out and vote for their chosen candidate on election day.”

The timeline for the FNC Elections 2019 is as follows – on Sunday, August 25, NEC will announce the preliminary list of candidates.

The following three days will be open to the public should they wish to submit objection letters against any of the listed candidates. On Sunday, September 1, NEC will announce its response to the objections received. The final list of candidates will be released on Tuesday, September 3. Wednesday, September 4, marks the first day of the period provided for candidates to submit the names of their agents as per the executive orders in this matter.