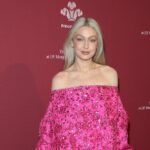 Ahead of the new season, which does not have a release date, Hadid took to Instagram to share her excitement over the forthcoming episodes and gush about her co-host, calling the British reality television star her “brother” and stating that shooting the new show together has been “a joy of my life.”

The 27-year-old posted a carousel of photos on Instagram, which included a snap of her posing with France and reading the “Next in Fashion” script.

“Can’t believe we’re almost a month into making a new season of @nextinfashion. Want to say, with only a couple weeks left, that shooting this show alongside my brother @tanfrance has been a joy of my life,” the US-Dutch-Palestinian model captioned the post. “I can’t wait for you all to meet these designers — an amazing, talented, sweet, cool, deserving group of humans and for them to share themselves and their creations with the world! We have so much in store for you,” she added.

The first season of the fashion competition show, which premiered in January 2020, featured 18 designers who faced weekly design challenges to win a $250,000 prize and a chance to have their collection sold on Net-a-Porter.

France also recently lauded his “Next in Fashion” co-host and dubbed her an “amazing mom.”

In a conversation with Us Weekly, the host said he has received many parenting tips from the supermodel, who welcomed a baby girl with former One Direction star Zayn Malik, in 2020.

He told the publication: “She’s one of my closest friends. I love her so much.

“It makes the show really, really fun,” added France. “It’s probably the best time I’ve ever had on a show.”

The 39-year-old continued: “She’s an amazing mom. I’ve gotten so many tips from her,” adding that he “of course” has met her daughter Khai.
Main category: LifestyleFashionTags: Gigi Hadid