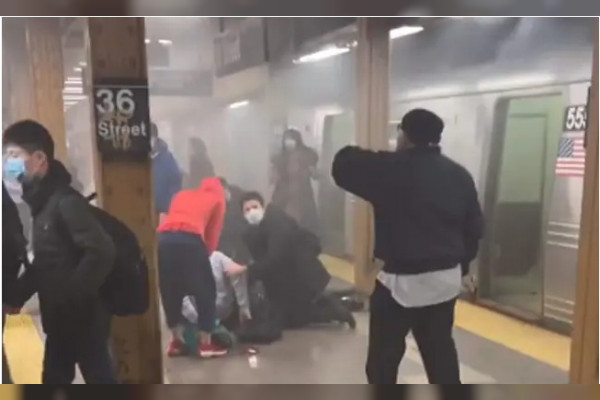 NEW YORK, 12th April, 2022 (WAM) — A gunman in a construction vest donned a gas mask, set off a smoke canister on a rush-hour subway train, and shot at least 10 people Tuesday morning, US authorities said.

The shooter was at large after leaving wounded commuters bleeding on a Brooklyn platform while others ran screaming.

Five people were in critical condition but expected to survive. At least 16 in all were injured in some way in the attack that began at 08:30 on a train that pulled into the 36th Street station in the borough’s Sunset Park neighborhood.

Police Commissioner Keechant Sewell said that the attack was not being investigated as terrorism, but that she was not ruling out anything. FBI agents and members of the Joint Terrorism Task Force surveyed nearby businesses, interviewing witnesses and searching for surveillance footage.

Police helicopters hovered overhead for hours as authorities searched for the shooter, who has not been identified. The motive remains unknown.

Investigators recovered a firearm at the scene, along with multiple smoke devices and other items they are analysing, according to two law enforcement officials who were not authorised to discuss the ongoing investigation and spoke on condition of anonymity.