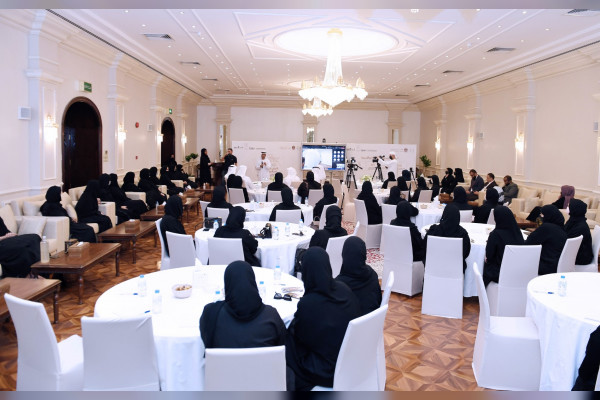 ABU DHABI, 22nd June, 2022 (WAM) — The General Women’s Union (GWU) launched the first training course of the Cyber Pulse initiative for women and families, in collaboration with the UAE Cybersecurity Council, the Telecommunications and Digital Government Regulatory Authority (TDRA), the Supreme Council for Motherhood and Childhood and the Khalifa Empowerment Programme (Aqdar).

The training initiative, held at the GWU headquarters in Abu Dhabi, under the patronage of H.H. Sheikha Fatima bint Mubarak, Chairwoman of the GWU, President of the Supreme Council for Motherhood and Childhood, and Supreme Chairwoman of the Family Development Foundation (FDF), aims to enhance the role of Emirati women in the field of cybersecurity.

The training course aims to qualify female trainees of all ages, starting from those aged 15 to 18, and those undergoing university education aged 18 to 22, as well as mothers, whether they are housewives or workers, and senior citizens.

Participants will later take a test to select 50 trainees to enter the second phase of the initiative, whose courses, workshops and lectures will target 50,000 community members.

The event was attended by Noura Al Suwaidi, Secretary-General of the GWU, Mohammed Hamad Al-Kuwaiti, Head of cybersecurity for the Government of the UAE, Dr. Ibrahim Al Dabal, CEO of Aqdar, and Mohammed Ibrahim Al Zarouni, Deputy Director-General of TDRA’s Information and Digital Government Sector.

Al Suwaidi said the UAE has established a prominent international stature in digital transformation, due to the proactive visions of the country’s leadership and its future roadmap. Under this framework, the GWU has been keen to provide development opportunities for women in the field of cybersecurity.

She then thanked the GWU’s strategic partners, which have helped make a real change in the women’s empowerment process, calling on federal and local authorities and civil society organisations to cooperate and support plans and programmes aimed at training technology skills to women.

Dr. Al Dabal confirmed that the Cyber Pulse initiative for women and the family was meant to support Emirati women, enhance their capabilities in facing the challenges of cyberspace and empower them with modern tools and technologies.

He added that, as part of its strategic cooperation with the GWU and the UAE Cybersecurity Council, Aqdar has aimed to launch distinctive initiatives targeting women, offer digital expertise and enable them to participate in the new opportunities in the digital world, in light of the increasing interest in cybersecurity in the UAE and the growing dangers of the digital world, where internet users, including women, face many threats related to electronic crimes.