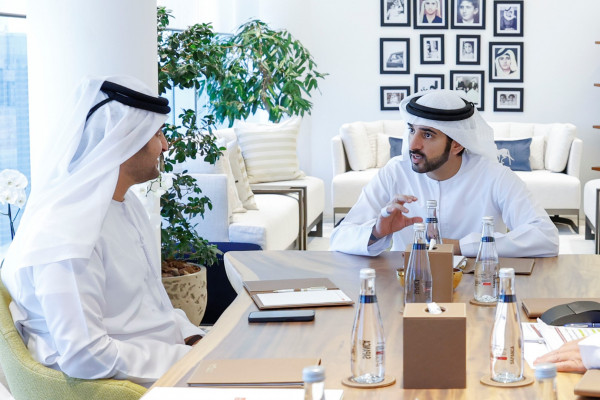 During the meeting, Their Highnesses reviewed the performance and recent projects of the two entities and stressed on the importance of increasing productivity and developing comprehensive strategic plans to achieve the organisations’ objectives.

Sheikh Hamdan said that guided by the vision of His Highness Sheikh Mohammed bin Rashid Al Maktoum, Vice President, Prime Minister and Ruler of Dubai, to enhance government efficiency in the next phase of the nation’s growth, Dubai’s government departments are seeking to further streamline their operations and enhance their competitiveness.

“The comprehensive restructuring plan of Dubai Municipality and Dubai Land Department forms part of Dubai’s efforts to transform itself into the world’s best city to live and work and ensure its services and operations keep pace with the evolving global environment. It also seeks to raise Dubai’s ranking in various global indicators including environmental sustainability, food security, healthcare, and real estate investment,” Sheikh Hamdan said. “The teams in the two departments have a great responsibility to lead and manage Dubai’s strategic projects. We will be closely following their progress and supporting them to achieve their objectives.”

For his part, Sheikh Maktoum said, “Under the leadership of His Highness Sheikh Mohammed bin Rashid, Dubai has set an example for the world in constantly enhancing government operations. Today, we have new priorities and development plans aimed at maintaining Dubai’s competitiveness.”

“To achieve our future aspirations, we need to be responsive to the needs of the community and enhance our productivity and quality,” he noted. “The next phase will see Dubai further improving its services and raising its level of government excellence. We will be closely monitoring the performance of government entities.”

The new restructuring plan of Dubai Municipality seeks to transform itself into an organisation with a private sector mindset that provides globally-benchmarked services, while keeping pace with the latest developments in sustainable development, environmental preservation, combating climate change and the circular economy. The plan also seeks to promote productive partnerships with the private sector and create new business opportunities worth AED10 billion per year.

The restructuring plan also aims to reduce operational costs by 10 percent, and improve the quality of services by 20 percent, in addition to maximising the economic, tourism and commercial potential of the Municipality’s public assets. The plan has outlined eight major areas for the Municipality to develop partnerships with the private sector.

The comprehensive restructuring plans of Dubai Municipality and Dubai Land Department, were announced during a recent meeting of the Dubai Council chaired by His Highness Sheikh Mohammed bin Rashid Al Maktoum.

‘Lifeline’ of renewable energy can steer world out of climate crisis: UN chief