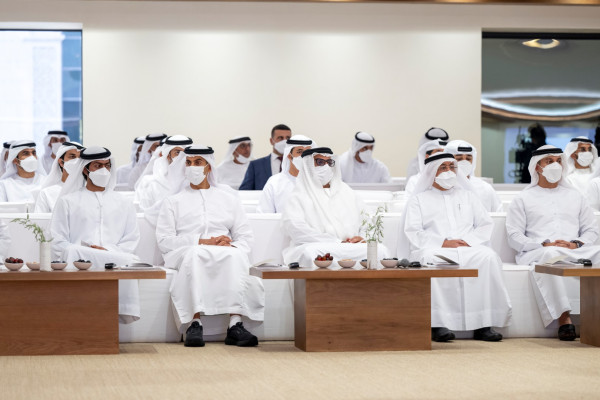 The lecture was presented by Michael B. Horn, the co-founder of and distinguished fellow at the non-profit think tank Clayton Christensen Institute for Disruptive Innovation, and an adjunct lecturer at Harvard Graduate School of Education.

Horn began his lecture by saying the Covid-19 pandemic had revealed how broken the traditional school system was and just how much traditional schools were not the social experiences we think they are. School isn’t properly engaging some students and isn’t helping them make progress. Instead it was causing them to feel like failures, he said. The author of several books, including the recently released From Reopen to Reinvent: (Re)creating School for Every Child, Horn said the pandemic had shown that schools weren’t as flexible and equitable as we need them to be and called for an overhaul of the education system.

The distinguished education strategist said the traditional school system reflects a zero-sum view of the world, in which it is assumed that resources are scarce and for every winner there must be a loser. He said school structures worldwide had been built on a historical legacy of sorting students out of the education system, instead of supporting them. This stemmed from a scarcity mentality that there were only limited opportunities, so we must select those students who would benefit the most and discard the rest. By the age of 18, the vast majority of students had already been labelled, said Horn, who’s been listed among Tech&Learning magazine’s 100 most important people in the creation and advancement of technology in education. Instead of helping students understand their strengths and make decisions about potential career paths, we have signaled to many pupils that they are “not good enough” for certain pathways or that they are “below” others.

This causes society to miss out on unique talent that could have been developed. And it ignores that so much of our society is built on a positive-sum mindset, which holds that when individuals achieve success, the pie grows larger for all of us. Horn said we ought to view schooling not as a game to be won, but as an effort to help every individual thrive and be productive. He said students don’t learn in a linear way, all on the same path and at the same pace. They develop at different rates and have different strengths and weaknesses, with different contexts, background knowledge, working memory and cognitive capacities, and social and emotional learning states.

Traditional schooling and its scarcity mindset are anomalies today, Horn said. A better alternative is reinventing school culture as a whole and reorienting it toward a mastery-based, positive-sum system that will allow students to embrace their strengths and flourish. Today’s technology allows us to personalize learning in unprecedented ways. Opportunity is now abundant, he said.

The best-selling author said the traditional system wasn’t great for learning, adding that across most of the world, academic results left much to be desired. He said this was because we have a system that undermines student performance, collaboration, cooperation and interconnectedness instead of harnessing all of these to create a system that is social and in which students can have fun, and yet is more rigorous and better for learning. Horn said educators should explore moving to mastery- or competency-based learning models in which teachers could better personalize learning and help students build their knowledge, hone skills, develop habits of success, embark on real-world projects and build relationships.

Unlike the traditional school system in which time is held as a constant and each student’s learning is variable, in a mastery-based learning model time becomes the variable and learning becomes guaranteed. Students only move on from a concept once they demonstrate mastery. Success is part of the model for it guarantees that students actually learn. Mastery-based learning fosters a growth mindset allowing students to collaborate rather than compete, communicate, solve problems, learn from failures, improve their performance and master academic knowledge, skills and habits of success. It also prepares students for the real world and allows them to understand how they can best contribute to society, build their passions and fulfill their human potential.

Horn said that creating a more motivating, sustainable and gratifying teaching profession was critical, adding that the traditional one-to-many teacher-to-student model was broken and was contributing to the high turnover of overworked, stressed teachers. He said one change that could significantly help teachers was to make teaching a team sport that distributed different roles across several individuals. This would involve co-teaching, in which groups of teachers actively work together as they support large groups of students, coaching, motivating and guiding them. Making teaching a more collaborative experience would help to create a web of support for students and teachers that embraces success. Parents also need to be co-opted in the design of schooling, Horn said, noting that many parents are becoming more proactive around their schooling preferences for their children.

Horn said educators should explore using technology that saves teachers time, extends their reach, and deepens their understanding of students. Technology can also improve student feedback and automate manual, laborious processes for teachers and administrators. Above all, he said, educators should rethink the notion that a one-size-fits-all school system that pits students against each other in a zero-sum competition is the right answer for developing students and supporting parents.

What are the eligible categories to get a UAE visa for a stay without work for 60 days?