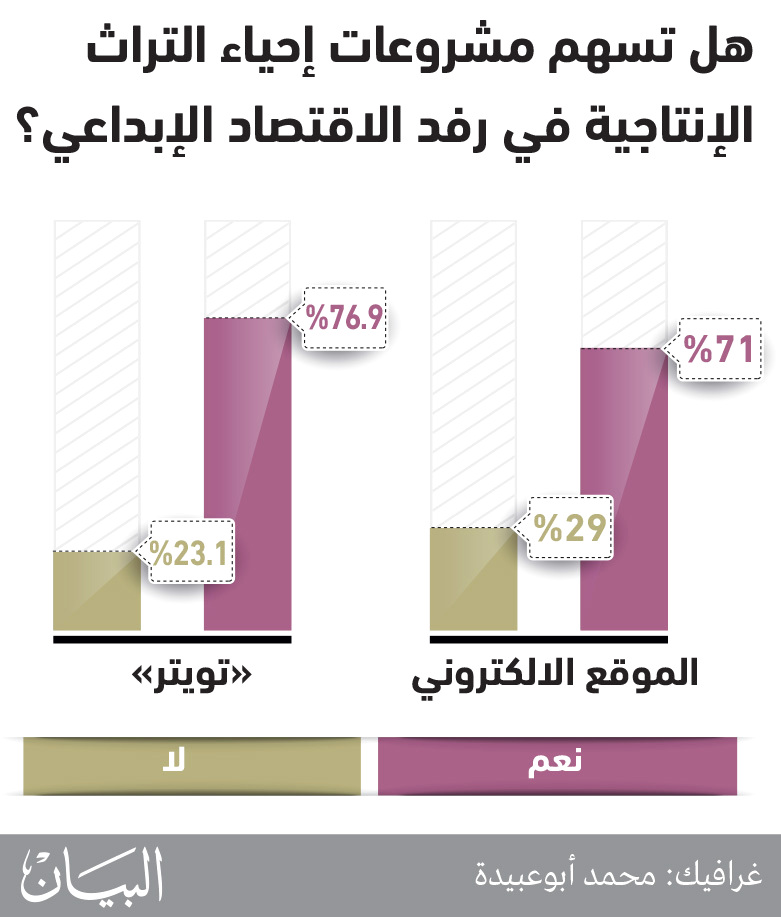 Creative projects covering heritage aspects form an important part of the creative work system, where productive heritage revitalization projects find wide platforms on various occasions, with the aim of introducing the history, civilization and folk heritage of the United Arab Emirates, as well as in places that attract tourists and visitors to the country, in malls, museums and heritage sites, Through products that reflect different aspects of the folklore, with the demand of entrepreneurs and the tendency of tourists to buy them.

Al-Bayan sought to explore this question through the weekly poll and posed the following question to its followers: Do productive heritage restoration projects contribute to the creative economy?

Commenting on these findings, the heritage researcher Abdullah Al-Murr Al-Kaabi said: The productive heritage projects contribute to supply the creative economy with the presence of heritage experts who are responsible for these projects and who are engaged from the foundation until the implementation to be supporters of this vital and important project after several years after its establishment to know the moral return that prevailed in the last period and therefore there was a tangible creative financial return that will continue and other cultural heritage projects will be built upon.

In turn, Aisha Ahmed Al Hosani, owner of one of the projects specialized in this area, said: The productive heritage revitalization projects contribute to the creative economy as they help to attract creators, increase productivity, increase the creative workforce and increase the creative domestic product, as many individuals and institutions turn to the page.heritage in their apartments, whether from folk food or distributions and heritage souvenirs, in addition to the increased demand in public or private events and celebrations, as it is a facade or decoration that enhances the heritage aspect and its cultural heritage and it attracts the current generation and it is a link between the two generations that increases the interdependence. Attracting tourists, and educating current and future generations about this folklore with its various productions and beautiful images, which contribute to the economic and creative aspect. She attracted attention through her experience, where she noticed the increase in prices of some products after adding heritage ideas, which means an economic recovery that helps to support this economy.