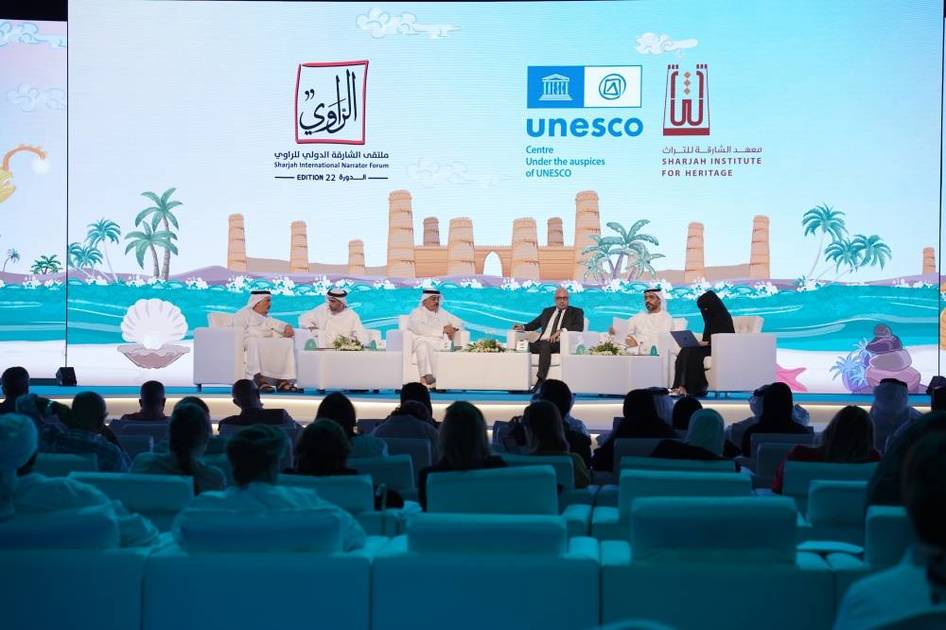 The guest of honor of the Sharjah International Narrator Forum for the year 2022, Emirati artist Ibrahim Juma Al Haj Ibrahim, performs at the beginning of the first session, which was held under the title (Arts of the Sea) and moderated by Khaled Al -Bdour, where you are hardly impressed by a part of his memories and experiences before he dives deep into you again in other memories that carry. Among its aspects is a complete system of images of the life that the ancestors lived, from which you smell the smell of the sea, the joy of the conversations of the councils, the laughter of Al-Nawakhatha and Al-Ghais, and it does not end with the dangerous situations or the pranks , which together constitute the taste of the sea, and the legacy of predecessors.
Al Haj began his speech by praising His Highness Sheikh Dr. Sultan bin Muhammad Al Qasimi, Supreme Council Member and Ruler of Sharjah, for his exceptional generosity and his continuous support to artisans, people of heritage and lovers of the sea and land from various places and regions in the UAE and outside the Emirates .
As for the lion’s share of Al-Hajj’s speech, it was about pearl diving, which indicated that the people of Dubai and the Emirates were known along the coast of the Arabian Gulf as skilled divers, and the journey to search for him was filled with many emotions mixed between joy and sorrow when preparations began to go towards “Al Hayrat” To fish for pearl oysters, this day they called “the knee” when they are ready to board the ships, while many families of sailors and women stand along shore to bid them farewell by shouting and weeping and singing many of the greed that we have preserved for these times, after which the ships move towards their destination and spend three months at sea, and on the last day of the sailors at sea , a cannon shot was fired to announce the start of the homecoming.
In his brilliant speech about the sea and its art, Al-Hajj talked about the functions and responsibilities of the team that worked on the ship’s deck, such as “Al-Sardal” who is the captain of the ship’s fleet, “Al-Nokhatha” who is the captain of the ship , who prepares everything for it from the beginning of its journey to its end, and “Al-Majdami” “Lamqadami” is the one who sits at the front of the ship, “Al- Seeb” is the diver’s direct helper and is responsible for his safety , and “Al-Sakuni” is the man who holds the “helm” of the ship and the “guest.” His age is between 10 and 14 years old and his role is summed up in doing some simple chores.
Al-Hajj confirmed at the end of the session that most works and crafts in the United Arab Emirates in the past were accompanied by some kind of song, so that time passes quickly and the souls of workers are filled with happiness, it was necessary to sing and create an atmosphere of joy that removes misery and trouble from them, and the tongues circulated a lot of wonderful instincts. What makes the matter even more beautiful is that each emirate has its own identity in terms of words and melodies in the greedy. Ras al-Khaimah is different from Sharjah, and Sharjah is not Dubai, etc. Together, it forms a fresh, joyful bouquet that renews itself over time as it tells the story of the people who loved their homeland and forged. a great civilization that everyone is proud of today.