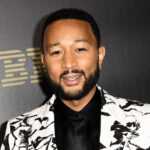 Fri, 2022-04-22 12:10
DUBAI: US singer and songwriter John Legend is set to perform his first concert in Egypt in July, show organizers have announced.

The 43-year-old music sensation will meet fans in the North Coast at the Playa resort on July 22.

The “All of Me” singer is among other A-list stars who have recently added Egypt to their tours.

US rock group Maroon 5 will perform at the Giza Pyramids on May 3, while American Grammy-winning band the Black Eyed Peas will hit the historical site’s stage on Oct. 2.

Legend, also famous for songs “Glory” and “Green Light,” previously performed in the UAE in 2020 at Dubai’s Coca-Cola Arena.

And in 2015, Legend won the Golden Globe Award for co-writing “Glory” from the film “Selma.” He is also an actor and received a Primetime Emmy Award nomination for his role in NBC’s musical “Jesus Christ Superstar,” which he also produced.

Department of Municipalities and Transport saves 12.4 billion gallons of water in 2021