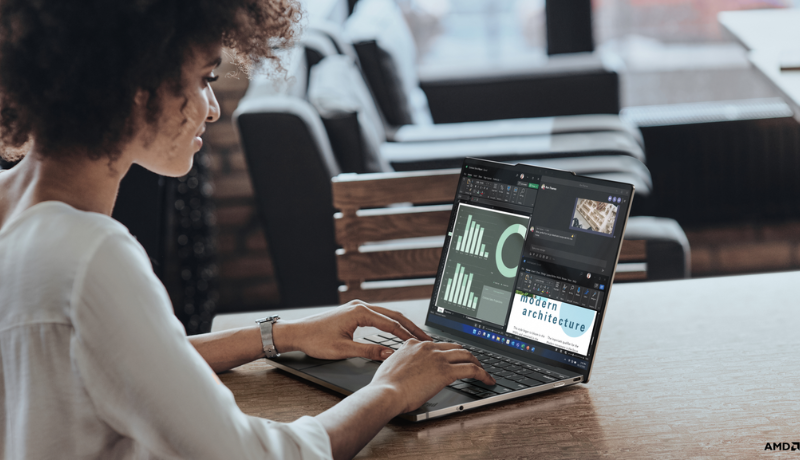 Lenovo is excited to announce the launch of new ThinkPad laptops in the UAE, which feature stunning progressive designs that break the mold and introduce new colors and materials to our premium business laptop portfolio.

The new ThinkPad Z13 and Z16 adopt a modern design philosophy aimed at a different business user audience. The new eye-catching design reflects shifting attitudes toward technology, its environmental impact, and the origins of raw materials. Not only is the design intended to provide distinctive premium color accents such as bronze and arctic grey, but it also incorporates more sustainable materials such as recycled aluminum and recycled black vegan leather2. The packaging is made of 100% renewable bamboo and sugarcane, and the AC power adapter contains 90% post-consumer content (PCC).

The ThinkPad Z13 and Z16 will be among the first laptops to use the most recent AMD RyzenTM PRO 6000 Series processors for mobile in conjunction with the Microsoft Pluton security processor. Performance and security features are inextricably linked, and Lenovo’s secure-by-design methodology has been enhanced through collaboration with AMD and Microsoft. The AMD Ryzen 6000 Series are the first x86 processors to integrate the Microsoft Pluton security processor for powerful security from chip to cloud on Windows 11 PCs, building on AMD PRO security’s layered approach. Microsoft designed and updates the Microsoft Pluton Security Processor, which hardens new Windows 11 PCs with protection for user identity, data, and applications.

Furthermore, Lenovo and AMD have worked together to create a cutting-edge platform design, streamlining all aspects of the system from silicon to hardware and software. The ThinkPad Z13, in conjunction with the exclusive AMD RyzenTM 7 PRO 6860Z processor3, provides an exceptional collaboration experience. In applications like Teams and Zoom, the processor is optimized to deliver seamless audio and video performance, maximize responsiveness, and deliver incredible battery life. The ThinkPad Z16 can also be equipped with the new AMD RadeonTM RX 6500M discrete graphics with AMD smart technologies, which boost productivity, enable advanced content creation, and casual gaming. When used in conjunction with Ryzen processors, AMD Smart Shift Max provides an instantaneous power boost for both the CPU and GPU, while Smart Shift Eco is intended to maximize battery efficiency.

As we begin to commemorate ThinkPad’s 30th anniversary, we are extremely proud of the legacy and heritage that ThinkPad has earned, and our commitment to innovating for the benefit of the end user will continue for decades to come. We are very excited about the significant design evolution in the ThinkPad Z series, but above all, the ThinkPad Z13 and Z16 continue to echo the brand’s core foundational design and engineering tenets.

To improve the individual user experience, key design and technology features have been integrated into the ThinkPad Z series. Minimalism is designed to be sophisticated and desirable. Ultra-narrow bezels and productive 16:10 aspect ratios have been optimized for displays. A new Communications Bar houses a better FHD webcam with a larger 1.4m sensor and dual-array microphones, enhancing audio and video conferencing. For quick and easy input, a larger 120mm glass haptic ForcePad that flows seamlessly with the all-glass palm rest is introduced, and those familiar with the iconic red TrackPoint will notice a new feature: Double-tapping the TrackPoint brings up a Communication QuickMenu, which provides quick access to common camera and microphone settings.

Pricing and Availability in the UAE