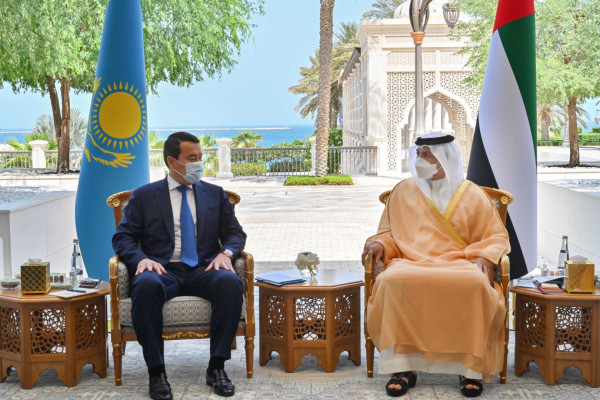 The meeting addressed ways of enhancing the cooperation between the UAE and Kazakhstan, in line with their process of development, as well as issues of mutual concern.

Sheikh Mansour highlighted the importance of the deep-rooted strategic partnership between the two countries, noting that the UAE’s leadership is keen to strengthen their ties.

He also wished Smailov and his delegation a successful visit to the UAE, to achieve its goals of improving the bilateral ties between the two countries, launching mutual development projects and attracting investment.

Sheikh Mansour and Smailov attended the signing of seven Memoranda of Understanding (MoU) and cooperation protocols between the UAE and Kazakhstan.

Under the same framework, Omar Suwaina Al Suwaidi, Under-Secretary of the Ministry of Industry and Advanced Technology, and Kairat Turibayev, Deputy Minister of Trade and Integration of Kazakhstan, signed an MoU between the two ministries in the area of technical regulations, standardisation, conformity assessment, accreditation and standards.

Abdulrahman Al Hammadi, Under-Secretary of the Ministry of Education for Performance Improvement, and Kuanysh Yergaliyev, Deputy Minister of Science and Higher Education of Kazakhstan, signed a cooperation protocol in the field of higher education.

Moreover, the national archives of both countries agreed on a cooperation protocol, which was signed by Abdullah Majid Al Ali, Director-General of the National Archives, and Yerzhan Yerkinbayev, Vice Minister of Culture and Sports of Kazakhstan.

Abdullah Mohamed Al Mazrouei, President of the Federation of UAE Chambers of Commerce and Industry, signed a cooperation agreement with Kairat Torebayev, Vice Minister of Trade and Integration of Kazakhstan.

Sheikh Mansour received Smailov upon his arrival yesterday with his accompanying delegation to the Presidential Airport in Abu Dhabi.