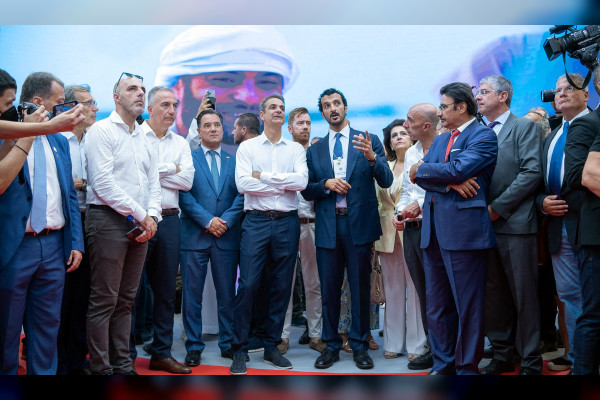 The meetings focused on promoting collaboration and bilateral relations between the two countries and highlighting the key economic sectors for investments in the UAE, including the non-oil industries, whose exports have recently registered unprecedented growth.

Greek Prime Minister Kyriakos Mitsotakis inaugurated the UAE pavilion at the latest edition of TIF in the presence of the UAE Minister of Economy. The bilateral meeting followed the opening ceremony, during which, the two ministers discussed means to promote cooperation and develop existing trade and investment relations. They also attended a seminar on the US-UAE investments.

The meetings explored ways to expand economic collaboration by enhancing trade and investment activities between the two countries, increasing the non-oil trade, as well as exploring promising opportunities within the two countries’ markets.

Bin Touq also met with Vassilis Kikilias, Greek Minister of Tourism, to discuss strategies to encourage tourism and air connectivity between the two countries. Their meeting also focused on promoting the integration of technology in tourism services, thus contributing to the sustainable development of this vital sector and increasing its contribution to the GDP in both countries.

Furthermore, Al Marri met with Kostas Karamanlis, Greek Minister of Infrastructure and Transport, to discuss ways to enhance bilateral cooperation in the infrastructure and transport sector. The discussions also focused on facilitating the exchange of expertise and experiences between the two countries to enable best practices followed in the sector and promote digitisation.

In addition, Bin Touq held a meeting with Constantine Tassoulas, President of the Hellenic Parliament, during which, the two sides discussed strengthening cooperation in all fields, especially economy and trade, and raising them to new levels that support the development of both economies.

Moreover, the pavilion sheds light on the UAE’s new economic model, the success of its economic diversification efforts and the development of the non-oil economic sectors. It also highlights the UAE’s leading position on the global trade landscape as reflected by the growth of the country’s national non-oil exports, which registered an unprecedented record in the first half of 2022, totalling nearly AED180 billion for the first time in its history.

The UAE is striving to increase the contribution of its industrial sector to the GDP, which currently amounts to AED133 billion, to reach AED300 billion by 2031. The country has also allocated US$1.4 billion from its 2021 budget to support and develop the healthcare sector.

Furthermore, the government spending on generic medicines is expected to reach US$1.4 billion by 2030, which supports the development of the pharmaceutical segment in the UAE and boosts its growth by 7.3 percent.

As for the R&D sector, the industrial sector spending on research and development is expected to reach nearly AED57 billion by 2031. The UAE stands second in technology adoption according to the Global Competitiveness Index in 2020 and was ranked first in the MENA region’s food and beverage sector, as it accounts for 18 percent of the total F&B trade in the region.