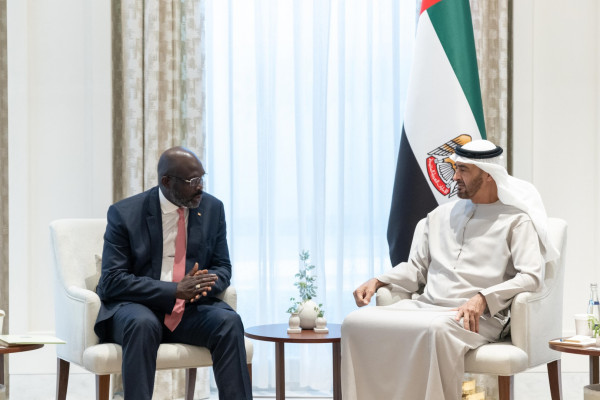 ABU DHABI, 30th May, 2022 (WAM) — President His Highness Sheikh Mohamed bin Zayed Al Nahyan today received President of Liberia, George Weah, at Qasr Al Shati’, where the African leader conveyed his condolences over the passing of Sheikh Khalifa bin Zayed Al Nahyan and recalled the track record of the late president and his role in the comprehensive development drive in the UAE.

He also congratulated H.H. Sheikh Mohamed on his election as the UAE President and his wishes of sustained progress and development to the Emirates.

The Liberian president expressed his country’s keenness to expand cooperation with the UAE during the next stage through constructive partnerships that benefit from the country’s development model.

Sheikh Mohamed expressed his thanks and appreciation to president Weah for the sincere feelings over the death of the late Sheikh Khalifa and toward the UAE leadership and people.