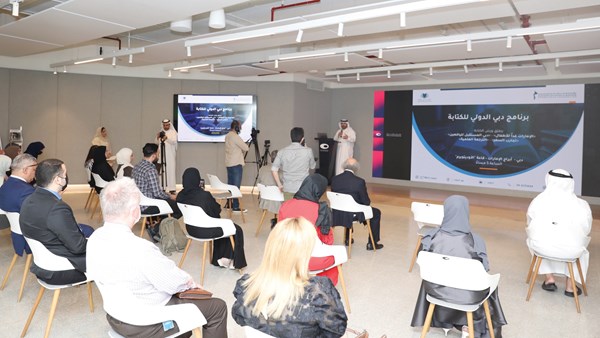 Mohammed bin Rashid Al Maktoum Knowledge Foundation announced the opening of the works of a new group of “Dubai International Writing Program”, which included the following training workshops, “The Emirates Tomorrow”, “Dubai Future”, “Scientific Translation” and “Travel Writing”.
The workshops aim to develop the skills of creative people and talented people in writing from the new generations by providing them with integrated training tools and programs and enabling them to benefit from the expertise and knowledge balance of a team of Arab and international trainers, as well as highlighting the importance of translation in the transfer of scientific knowledge and improving the capacity of the associated companies in this area. The workshops represent the latest addition to the work of the “Dubai International Book Program”, which under its umbrella includes knowledge projects and creative contributions dedicated to increasing the momentum of the knowledge movement locally, regionally and globally, and encouraging and empowering young talents and creative minds in writing.
Jamal bin Huwaireb, CEO of the Mohammed bin Rashid Al Maktoum Knowledge Foundation, said: “The Dubai International Writing Program has continued its central role in enriching the knowledge movement for nearly a decade and building a new generation of writing geniuses and thought leaders. based on solid linguistic, cognitive and scientific basis. With the help of Arabic and international expertise. He added: “The launch of the new workshops comes within the framework of the foundation’s commitment to promote intellectual and cognitive excellence and consolidate the role of the Arabic language, inspired by the directives of His His Highness Sheikh Mohammed bin Rashid Al Maktoum, Vice President. and Prime Minister of the United Arab Emirates and Ruler of Dubai, to enable the Arabic language to remain a language of the future, science and innovation.”
He explained: “The Dubai International Writing Program’s workshops and activities are a translation of the Mohammed bin Rashid Al Maktoum Knowledge Foundation’s vision to enrich the Arabic knowledge and linguistic output and encourage the Arab youth generation to carry the banner of excellence and creativity. in writing. We aim towards improving and facilitating the transfer of knowledge in order to overcome the obstacles to lay the foundations of knowledge societies’ economies and to create a qualitative leap in the movement of knowledge, centered on the consolidation of the presence of the Arabic language as a main tool of transfer and sharing of knowledge.”
For his part, Salem Al Owais, team leader of the Dubai International Writing Program, said: “The Dubai International Writing Program is an essential pillar in the system of initiatives and projects of the Mohammed bin Rashid Al Maktoum Knowledge Foundation, to increase the knowledge base of creative and ambitious young people talents, develop the skills of its affiliates, motivate them and provide them with the tools that allow them to progress on the path to excellence, following the example of their other former trainees who have achieved qualitative results and their products have won prestigious prices.”

Emirates tomorrow
Work on the first workshops began under the title “The Emirates Tomorrow: The Emirates After Fifty Years.” The workshop will last for four months and will include training young writers in the correct methods of writing children’s stories, introducing affiliates to children’s story literature and its elements, and ways of building texts with complete elements.
The Dubai International Writing Program’s workshops were also launched under the title “Dubai of the Future”. The workshop is also planned to last four months. The workshop will be conducted in two levels, the first of which will be periodic meetings, in person and virtually, held five times a month, while the second level will focus on daily communication and interaction through digital media dedicated to this purpose. The new initiatives of the Dubai International Writing Program included the launch of a “Scientific Translation” workshop, to highlight the role of translation in the transfer and participation of scientific content globally, and to provide affiliates with tools that improve their capacity in scientific translation.
On the sidelines of the program, a “Travel Writing” workshop was initiated, which focuses on refining the participants’ skills in depicting travel experiences and transforming them into literary productions and creative writings.

A guide to managing speed on the roads in Abu Dhabi