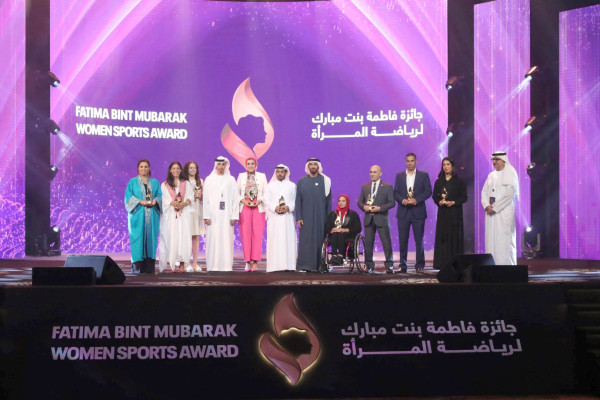 ABU DHABI, 17th September, 2022 (WAM) — H.H. Sheikh Nahyan bin Zayed Al Nahyan, Chairman of the Board of Trustees of the Zayed Charitable and Humanitarian Foundation, and Chairman of Abu Dhabi Sports Council, has crowned the winners of the sixth Fatima bint Mubarak Women Sports Award, which is held under the patronage and support of H.H. Sheikha Fatima bint Mubarak, Chairwoman of the General Women’s Union, President of the Supreme Council for Motherhood and Childhood, Supreme Chairwoman of the Family Development Foundation, and the “Mother of the Nation”.

This came as part of a ceremony held today at the Emirates Palace in Abu Dhabi.

The award is the first of its kind in the region and aims to empower women and highlight their achievements in the sports sector. Since its inception, the award has advanced H.H. Sheikha Fatima’s vision to enhance the position of Arab sportswomen at the local and international levels.

This year’s Sports Personality of the Year award went to Ons Jabeur from Tunisia.

The award’s individual and collective categories included various fields such as sports management, training, research, sports sponsorship, and women of determination, with the value of prizes totalling AED 1,700,000.

Mariam Al Mansoori, Fatima bint Mubarak Ladies Sports Academy Representative, said, “We are proud and happy to crown the winners of the sixth edition of Fatima Bint Mubarak Women Sports Award, as the ceremony witnessed unforgettable historical moments that showed the essence of the hard and fruitful work of the distinguished team at Fatima Bint Mubarak Ladies Sports Academy for the success of the award ceremony for the winners from the UAE and the Arab world.”

“The award categories have seen strong competition over the past months, which proves the talent, will, ambition, and development of Arab sportswomen. We hope to see Arab women continue to take the lead in local and international sports events, and this award will contribute to the birth of new achievements in the Arab women’s sports career,” Al Mansoori said, in conclusion.

It’s “Back to the Beach Season” at Lucky Fish