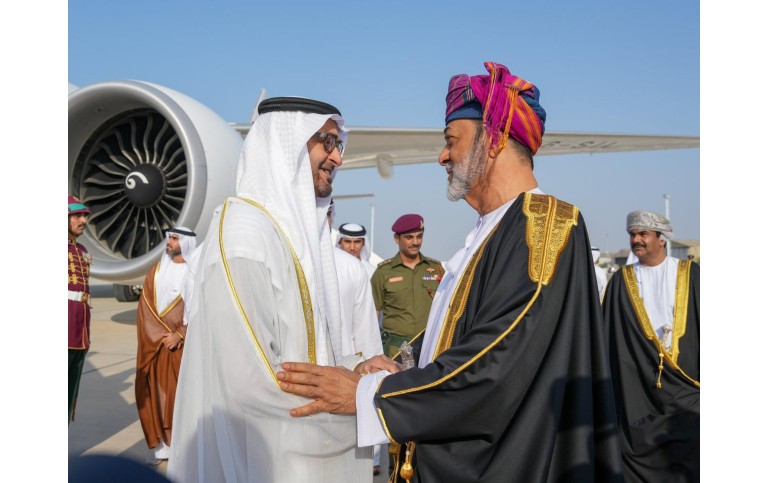 MUSCAT : Sheikh Mohammed bin Zayed Al Nahyan, President of the United Arab Emirates (UAE), has affirmed that the historically deep-rooted relations between the Sultanate of Oman and the UAE assume a special significance, and that these relations are a manifestation of a uniform social and cultural texture.

The UAE President pointed out that Oman-UAE relations stem from profound bonds where a broad base with family ties overlaps with shared interests.

In a statement on the occasion of the state visit he began in Oman today, Sheikh Mohammed bin Zayed expressed his deep delight to be in Oman which, he said, is accorded a unique status in the hearts of UAE leadership and people.

Sheikh Mohammed expressed his pride over the close fraternal relations that bind him with His Majesty Sultan Haitham bin Tarik. The UAE President commended the sincere approach of communication pursued by the leaderships of the UAE and the Sultanate of Oman.

In this context, Sheikh Mohammed recalled the special relations between the late His Majesty Sultan Qaboos bin Said and the late Sheikh Zayed bin Sultan Al Nahyan, stressing that the current leaderships will follow suit of their predecessors’ tradition.

The UAE President added that “economic and commercial relations between the two countries will continue to grow and prosper during the forthcoming period, with wide prospects for the utilization of available resources and opportunities.”

Sheikh Mohammed bin Zayed voiced his enthusiasm to work hand in hand with His Majesty Sultan Haitham bin Tarik to enhance relations along all fronts, starting with the establishment of firm grounds for future cooperation that will bring about bounty and prosperity to the peoples of the two countries.

Sheikh Mohammed bin Zayed said that the UAE will join hands with all GCC brethren, on top of them Oman, to consolidate the common march of action.

The UAE President said he looks forward to working more closely with His Majesty the Sultan “for the sake of peace, stability and prosperity of our region, its people and its steady growth.”

Arab Fashion Week to kick off in Dubai in OctoberÂ