Copyright 2021 - All Right Reserved
Home Business Over 17,000 issued and renewed licenses in Sharjah during 2022 Q1
Business 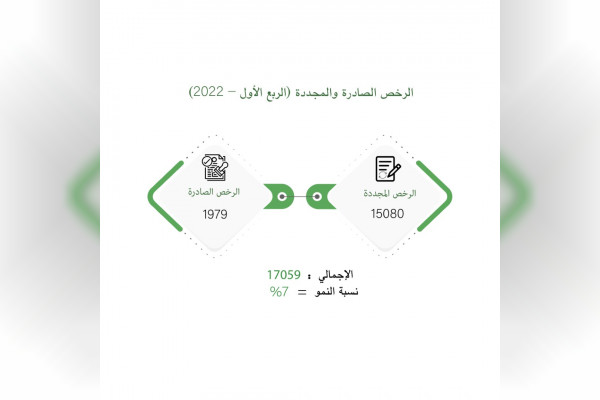 SHARJAH, 19th April, 2022 (WAM) — Sharjah Economic Development Department (SEDD) revealed that the first quarter of 2022 witnesses a remarkable growth in the number of issued and renewed licenses. Therefore, the total number of licenses reached 17,059 ones, with a growth rate of 7% over the same period in 2021, by an increase of 1,139 licenses, whereby the issued licenses hit 1979 ones while the renewed licenses touched 15,080 ones.

Commenting on that, Sultan Abdullah bin Hadda Al Suwaidi, SEDD Chairman, said that the data issued by the Department indicate a significant increase in the investment movement, especially in the issued licenses, which are indicators of sustainable growth for Sharjah’s economy.

Al Suwaidi said that the issuance of this data is one of the most important economic indicators that the Department relies on to study the economic situation in the emirate. He stressed that SEDD’s strategic objective is to achieve a comprehensive development plan that enhances economic development in Sharjah, by developing services to match the highest international quality standards in terms of speed of delivery and access to dealers in the economic sector and investors in the emirate, and striving to complete transactions with ease.

Also, SEDD continues to work on a number of sectors and development aspects, not only economic activities. This can be done through the continuous development of the business environment adopting business matchmaking processes, the use of smart investor techniques, reliance on premium partner cards, and the use of digital technologies. Likely, it can be done through applying government accelerators and continue to adopt quality systems for business continuity management, which ensures the quality performance of digital services in the business environment, and development in the areas of human capital in building innovative capabilities and investing in citizenship capabilities in universities.

From his side, Fahad Al Khamiri, Director of Registration and Licensing Department at the SEDD, confirmed that the results of the emirate’s business, including the issuance and renewal of business licenses, are in line with the general growth in GDP in Sharjah. He pointed out that the Department is working to simplify services and procedures, with the aim of facilitating business registration procedures, issuing business licenses, and providing greater flexibility for investors and dealers, in a way that allows them to establish their businesses within a short time.

Furthermore, SEDD handled 2,970 complaints received during the first quarter of this year 2022. Therefore, according to SEDD data, the complaints it received were distributed with consumer protection complaints forming the largest share with 2,463 complaints, followed by complaints of commercial fraud with 352 ones, and then service agent complaints that hit 155 ones.