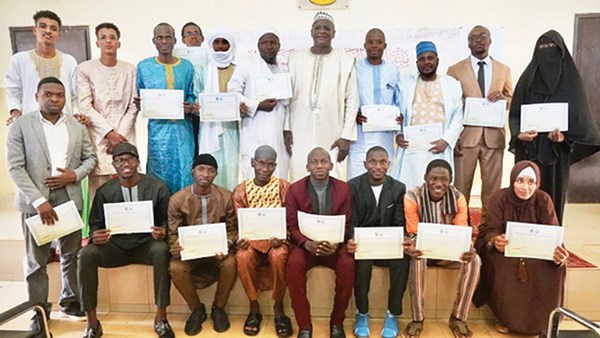 Under the patronage of His Highness Sheikh Dr. Sultan bin Muhammad Al Qasimi, Supreme Councilor and Ruler of Sharjah, Republic of Mali yesterday, Saturday, witnessed the first edition of the Arab Poetry Forum organized by the Ministry of Culture in Sharjah in collaboration with the “Bayan Magicians” Cultural Association in the capital, Bamako, within the framework of the Arab Poetry Forum’s Initiative in Africa, which aims to spread the Arabic language, expand the horizons of eloquent poetry and strengthen its presence among its creators.
The forum was also accompanied by an exhibition of ancient Arabic manuscripts acquired by the Republic of Mali.
Thirteen poets participated in the forum: Abdel Moneim Hassan, Youssef Mariko, Mohamed Jakiti, Bakri Cissé, Adam Tugura, Said Sanogo, Abdullah Kony, Daoud Tonkara, Khaled Megah, Daoud Traoré, Simiga Abu Bakr, Mohamed Ag Mohamedou and Fatima Traoré.
The opening ceremony was attended by the Undersecretary of the Ministry of Higher Education and Financial Research, Professor Ahmed Wan, and the President of the Arab French University of Mali, Dr. Mohamed Abdullah Diarra, vice-president of the University of the Sahel in charge of academic aspects, Dr. Ahmed Boli, and Head of the Arabic Language Department at the Faculty of Arts, Languages ​​and Humanities at the National University of Finance, Dr. Sambi Khalil Magasuba, and head of the Arabic language department at the Higher School for Teacher Training, Dr. Seko Namkari, and a number of Arab diplomats, academics, poets and those interested in Arabic poetry.

Thanks for sharjah
The Academy’s opening ceremony was presented by Salma Massoud, who initially welcomed the participants and emphasized the importance of Sharjah supporting and nurturing the Arabic language, poetry and creators in Mali, and praised the great role the emirate played in the spread of Arabic culture in Mali. global level.
The Ministry’s Under-Secretary, Professor Ahmed Wan, gave a speech in which he said: “We salute the initiative of Poetry Forums in Africa, which comes under the generous patronage of His Highness Sheikh Dr. Sultan bin Muhammad Al Qasimi, Member of the Supreme Council and Ruler of Sharjah , and we are happy for such scientific and cultural meetings in cooperation with Sharjah through the Ministry of Culture. ».
Wan added: “This first forum in Mali will promote the progress of Arab education in Mali.”
The Cultural Coordinator of the Republic of Mali, Abdelkader Idris, expressed his gratitude to Sharjah and said: “I extend my great thanks and great appreciation to His Highness Sheikh Dr. Sultan bin Muhammad Al Qasimi, Supreme Council Member and Ruler of Sharjah, after he had asked His Highness to organize poetry forums in West African countries and for his support of them, and his interest in Arab culture and Muslim affairs in general.”
In his speech, the head of the “Magicians of the Statement” Association, Abdul Samad Ahmed Mega, said that the forum represents a promising opportunity for financial innovators from the giants of literature and the knights of the word to reveal their creative poetic interior.