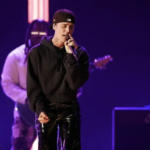 The musician had been due to perform two concerts on Oct. 8 and 9 at the UAE city’s Coca-Cola Arena.