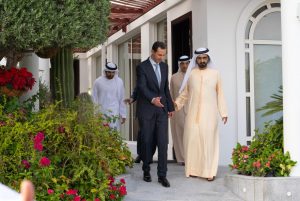 President Bashar al-Assad visited the United Arab Emirates and met His Highness Sheikh Mohammed bin Rashid Al Maktoum, Vice President and Prime Minister of the UAE and Ruler of Dubai, at His Highness’ rest in Al Marmoum in Dubai.

During the meeting, Sheikh Mohammed bin Rashid welcomed the visit of President al-Assad and the accompanying delegation, which comes within the framework of the brotherly relations between the two countries, expressing his sincere wishes for Syria and its people that security and peace prevail throughout the region, and that stability and prosperity prevail throughout the region for the good and development of all.

The meeting dealt with the overall relations between the two countries and the prospects for expanding the circle of bilateral cooperation, especially at the economic, investment and commercial levels, in a way that lives up to the aspirations of the two brotherly peoples.